West Side Story: Spielberg on casting the film from Latin American community 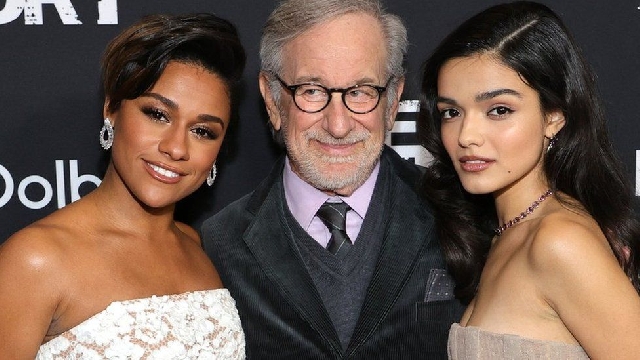 Photo by Getty Images: Steven Spielberg alongside West Side Story stars Ariana DeBose and Rachel Zegler at this week's premiere in New York

Steven Spielberg, the director of the new film adaptation of the musical West Side Story, has said he insisted on casting actors from the Latin American community for relevant roles.

The 1961 film has been criticised for having members of the Puerto Rican gang the Sharks portrayed by white actors.

Spielberg told the BBC he was striving for more authentic representations.

"First thing I said was every single Shark, boy and girl, needs to come from the Latinx communities," he said.

Latinx is a gender neutral, alternative description to Latino or Latina, and relates to people of Latin American origin or descent.

In September, to mark Hispanic Heritage Month in the US, a report from the Annenberg Inclusion Initative underlined the absence of Hispanic and Latino representation in the film industry, both on and off-screen - as reported by Variety.

"We just wanted for this movie to get it right in the way that we wanted every single person who plays a Puerto Rican to be from the Latinx community, and that was that was a mandate from the get-go," Spielberg explained, in an interview with Talking Movies' Tom Brook, on BBC Radio 4's Today programme.

West Side Story is a love story set amid two warring teenage gangs - the Jets and the Sharks - on New York's Upper West Side in the 1950s. Inspired by William Shakespeare's Romeo and Juliet, it is viewed by many people as the greatest American musical of all time.

Their rivalry is complicated when Tony, a member of the white gang the Jets, falls in love with Maria, the sister of a rival from the Sharks.

The film's screenplay was written by Tony Kushner, with a book by Arthur Laurents, music by Leonard Bernstein and lyrics by Stephen Sondheim, who died last week.

Spielberg has long been a fan but has never actually directed a musical before until now.

"I think I wanted to direct a musical film because I knew I couldn't sing and dance," added the ET, Jaws and Schindler's List filmmaker.

"It's a tremendous way of sort of throwing myself into a genre that physically I would never be part of, except to be able to tell a story in that idiom.

"I have a very good ear for music as my mom's a concert pianist, but I can't move my legs and I can't dance and I can't sing to save my life. But I have been in love with West Side Stories since I was 10."

The original film adaptation of the Broadway musical was a huge hit, winning 10 Oscars.

According to New York theatre critic Michael Riedel, Spielberg and Kushner's version has added intensity. "There is no fantasy here," he told the BBC.

"I mean, the fights. I was wincing, absolutely wincing when they go at each other.

"There's bloodshed, there's brutality, and yet, it manages to do a very tricky thing, which is there are these incredibly realistic and powerful scenes and then it becomes operatic it becomes musical theatre."

Sondheim 'is a genius'

The launch of West Side Story in New York this week has been bittersweet for Spielberg and his cast because of the death of US music theatre legend Sondheim aged 91, prior to the film's big Monday night premiere.

The lights in London's West End went out in a two-minute tribute Sondheim this week.

Spielberg spoke to him the week before his death and the late lyricist had said he "cannot wait" for the opening.

"I showed him the film back in February of this year and he loved it and could not wait until Monday night, he wanted to see it with a big audience," said Spielberg.

"And so of course when we got the news, I believe it was on Saturday, that he had passed, it was devastating - it is still devastating, I'm still not really accustomed to not being able to text him and email him and compare movie trivia.

"Steven was a tremendous cineaste and on the scale of Martin Scorsese and Guillermo del Toro, that kind of cineaste - as I have been all my life.

"For all his great work in the non-linear/linear musical stage - he's a genius - I miss him for being able to compare movies."

Sondheim's talents live on for all to hear in the new film, which has received overwhelmingly positive reviews, with many critics awarding Spielberg's retelling of the classic tale five stars.

"This is the first, full Steven Spielberg musical, and it seems he has been depriving himself and us all," wrote Empire's Helen O-Hara. "From the opening shot... there's barely a frame that isn't beautiful or a beat that feels off."

The Telegraph's Robbie Collin added: "West Side Story is, I believe, Spielberg's finest film in 20 years, and a new milestone in the career of one of our greatest living directors.

"The film fuses the colour and euphoria of a Golden Age movie musical with the teeming, dirty-fingernailed grandeur of a classic American immigrant epic."

The Guardian's Peter Bradshaw said Spielberg's "mastery of technique is thrilling", while Time's Stephanie Zacharek added: "This is movie as mirage. You won't believe it until you see it, and maybe not even then."

"The new West Side Story won't take the place of the glorious 1961 screen version... but with its more inclusive, ethnically appropriate and youthful casting, this is an emotionally charged and deeply affecting retelling of a timeless tale for a new generation," said The Hollywood Reporter's David Rooney.

The original film version of West Side Story's 10 Oscars included one for best picture. The new version is heavily tipped for multiple nominations in the forthcoming awards season.

"West Side Story is a bursting, live-wire pageant of a movie," wrote Variety's Owen Gleiberan. "I just wish it had a final act that soared instead of lumbering to what feels like an overly determined message-movie landing.