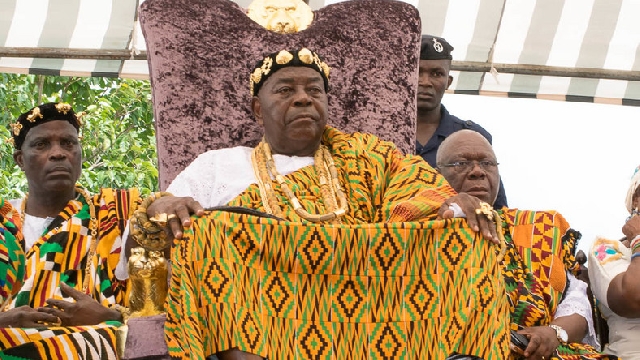 The Volta regional communication directorate of the opposition National Democratic Congress (NDC) has congratulated the Awomefia of Anlo, Togbe Sri III for his appointment as a sole mediator for the Bimbila chieftancy dispute.

President Nana Akufo-Addo mentioned at a durbar of Chiefs and people of Bimbila that the Awomefia has accepted his call to help solve the tension between the two royal families in the Northern region, Dasana Andani and Nakpa Naa Dawuni who are fighting over the skin.

The Volta NDC beliefs Togbe Sri III has the experince bring lasting peace between the two royal families of Bimbila in the Northern region.

The NDC in a statement wished him a successful mediation and prayed for peace in that part of the country.

Below is the full release

The National democratic Congress (NDC) Volta Chapter wishes to congratulate the Awomefia of Anlo state on his appointment to mediate the Bimbilla chieftaincy dispute in the Northern region.

The  Two royal gates - Dasana Andani family and Nakpaa Naa Dawuni family have been in an acrimonious and violent struggle over the rightful ruler of Bimbilla since 1994.

We believe with his rich experience serving as a member of the council of state under erstwhile former president Mahama's government puts him in a good stead to effectively function in his new assignment.

The national democratic congress, the people of the Volta region and the Anlo state wish him a successful mediation in bringing lasting peace to Bimbilla.