Should all acting stars stop flying to work? 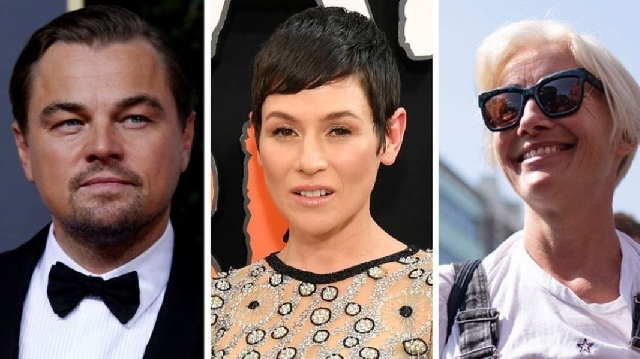 Before stepping up to collect their Golden Globe Awards on Sunday, Hollywood's great and good were warned by host Ricky Gervais to reassess their relationship with "the real world".

"If you win an award tonight, don't use it as a platform to make a political speech," he said.

"You're in no position to lecture the public about anything, you know nothing about the real world. Most of you spent less time in school than Greta Thunberg."

The UK actor, writer and comedian was joking, of course, but in doing so he touched on an important question: Are the rich and famous doing enough to help the planet that serves them so well?

On Tuesday, one famous actor vowed to do more - potentially at the expense of her career.

Australian Yael Stone, who played inmate Lorna Morello in US prison drama Orange Is the New Black, has said she's giving up her green card - which allows her to work in the United States - because regularly travelling between the two continents is "unethical" and "environmentally unjust".

In a video posted online, the 34-year-old detailed the reasons for her "personal sacrifice" in the climate change "war", saying, "The carbon emissions alone from that flying - it's unethical. It's not right.

"So I will be going through the process of giving up my green card, and saying goodbye to a life in America. I'm going to be here in Australia doing the work I can to make a difference here. Because the time is now."

Stone's compatriot Russell Crowe won the Golden Globe award for best actor in a limited series, for his role in the The Loudest Voice, but he did not fly out to Los Angeles for the ceremony.

Instead he sent Jennifer Aniston up to collect his award, who said Crowe was "at home in Australia, protecting his family from the devastating bushfires".

Crowe (via Aniston), Cate Blanchett, Nicole Kidman and Joaquin Phoenix all ignored Gervais's humorous plea, using their platform to raise the alarm about climate change, particularly with regard to the fires Down Under.

In November, Coldplay went a step further, revealing to the BBC's Colin Paterson they had shelved plans to tour their new album due to climate change concerns. Then, in December, Massive Attack announced plans to tour Europe by train to reduce their carbon emissions.

Many other artists have been left wondering how they can realistically adapt the way they work in 2020 to help save the planet.

"I think we're all part of a high-carbon system and the economy and of course, that doesn't absolve any of us in any way," says Chiara Badiali, from Julie's Bicycle - a service set up to support creative types working in a more environmentally friendly way. 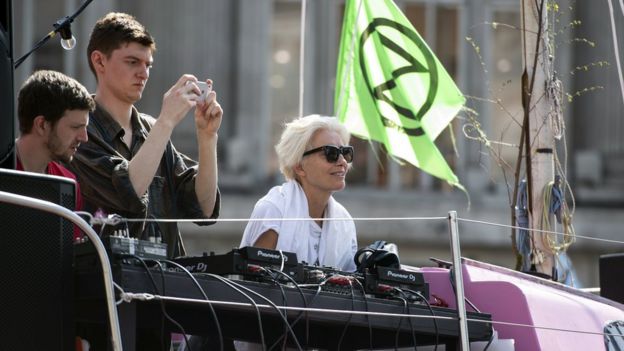 "And it means stepping back and thinking, 'How do I shift this? How can I try and move that dial to making a positive impact? What can I control and influence from from my position?

"There are definite things that we can do to reduce our environmental impact, and what is really exciting to see at the moment - and what really should be applauded - is a growing recognition, particularly from artists and people in the public eye, that they can really use that position to move the dial."

While Badiali applauds Stone's decision to stay grounded, she accepts not every artist is able to stop travelling by air right away and would prefer to encourage "radical" systematic change.

"I mean, personally, I can only applaud it," she says. "But I would not judge artists who don't feel in a position to make that choice at the moment. It is in many ways a very personal response and decision as well.

"So, does one person giving up something actually change the system as a whole? And what power do we have to do that? The argument is that it takes both - you have to have people who make what are seen as much bigger sacrifices to move the idea of what is possible."

Carbon offsetting allows passengers with money to pay extra to help compensate for the carbon emissions produced from their flights, but Badiali stresses it "should always be the last resort" and "the absolute bare minimum" that artists in "the global north" can do to help.

Some activists have criticised carbon offsetting as an excuse to continue polluting, arguing that it does little to change behaviour.

Leonardo DiCaprio was recently photographed taking a commercial airline rather than a private jet. 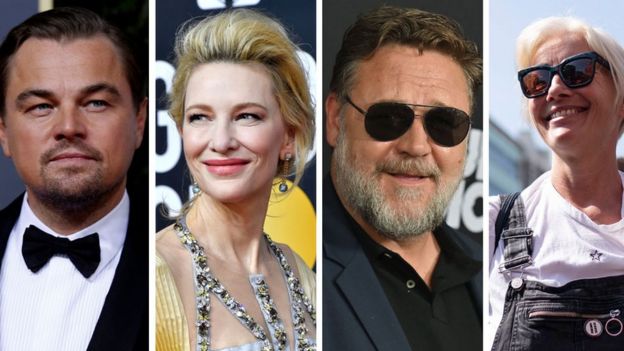 Perhaps no-one embodies the Hollywood dream more than DiCaprio. His Quentin Tarantino-directed love letter to the town, Once Upon a Time... In Hollywood, won big at the Golden Globes.

He's used his profile to raise awareness of global issues and, in 1998, launched the Leonardo DiCaprio Foundation - a charity devoted to environmental causes.

At the 2016 Oscars, he made a speech declaring climate change to be "the most urgent threat facing our entire species".

However, at the time, an article published on Forbes website declared the actor's decadent lifestyle meant his "carbon footprint is much higher than he thinks". Something the actor himself expressed concern about in his 2016 documentary for National Geographic, Before the Flood.

Last year, actress Emma Thompson lent her support to the Extinction Rebellion protests. While she was praised by some, others criticised her for having flown into the UK to do so. She defended herself, saying she planted a lot of trees and did not fly as much as she used to.

Badiali believes it's not particularly helpful to criticise big names, who may not be perfect but are generally using their profile to "challenge cultural norms", at a time when there are "no easy solutions".

"We tend to focus on what the stars are doing because they're very much in the public eye and it's the easiest thing in the world to try and undermine what they're saying by sort of pointing at them and calling them 'hypocrites'.

"But ultimately, the problem doesn't just start and end with them and we shouldn't be shutting down conversation in that way."

Aside from changing travel plans, shifting diets and spending habits are other ways artists can lower their emissions.

The Golden Globes this year selected an entirely plant-based meal for everyone to enjoy/endure (delete as applicable). The menu shift was made in order to "send a signal and draw attention to the issue about climate change".

Some showbiz reporters were aghast at the work of Hollywood's "vegan extremists", while others found that notion entertaining in itself.

Meat-eaters having a meltdown at the prospect of *one meal* without meat will never not be hilarious https://twitter.com/danwootton/status/1213874968418643969 …

This is the plant based meal being given to all guests at the Golden Globe Awards this year. No option with meat at all. No choice. Welcome to Hollywood in 2020 where vegan extremists rule. 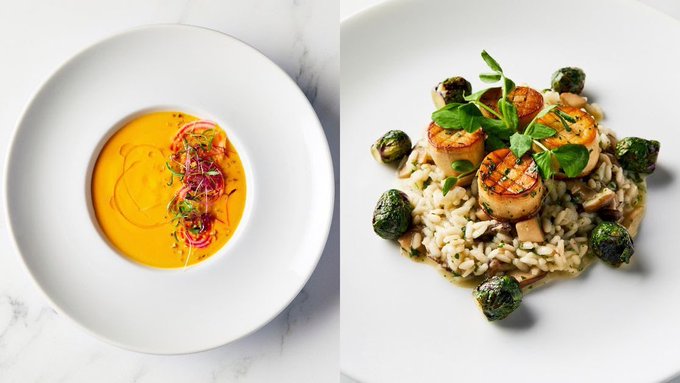 (In an even more audacious move back in 2013, the Screen Actors Guild Awards presented their guests with newly-planted trees each in South America, instead of the usual goodie-bag bling).

Terminator, Titanic, and Avatar director James Cameron was an early adopter of the plant-based diet, challenging others to follow suit in a video posted to the Earthlings Facebook page many moons ago.

Eating is cheating for some at award ceremonies anyway, but everybody has to wear something new on the red carpet, right? Wrong.

This man is a winner… wearing custom Stella because he chooses to make choices for the future of the planet. He has also chosen to wear this same Tux for the entire award season to reduce waste. I am proud to join forces with you... x Stella#JoaquinPhoenix #GoldenGlobes 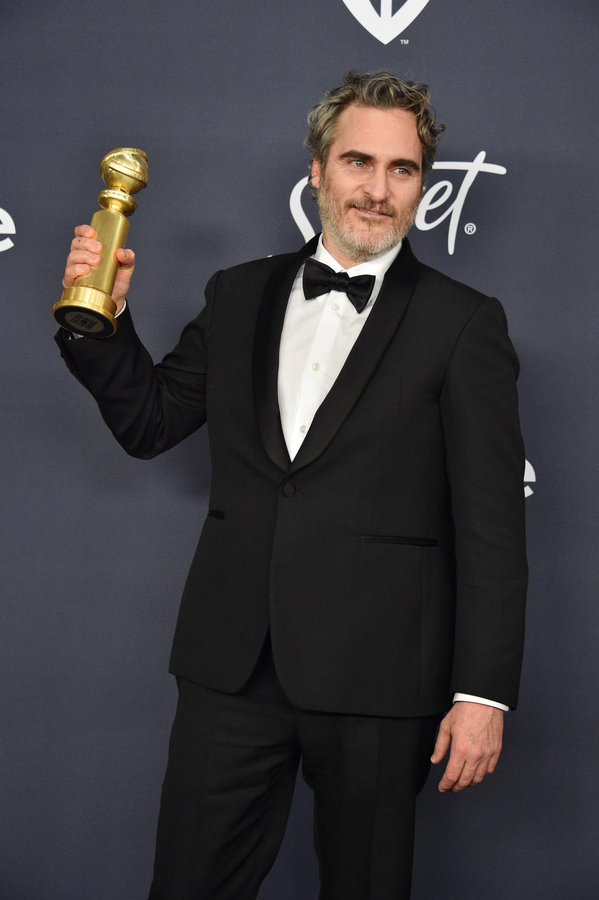 Joker star Joaquin Phoenix - who noted that "we don't have to take private jets to Palm Springs for the awards" while winning best actor in a drama - was praised by Stella McCartney on Monday for also committing to staying in the same tuxedo throughout this year's awards season.

Just like you or I might do for a gruelling run of weddings, funerals and job interviews.

"This man is a winner," declared the designer, in multiple senses.