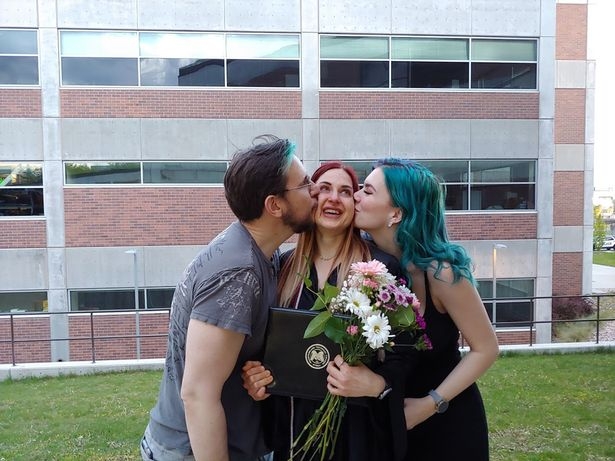 A woman flew more than 500 miles to lose her virginity to a man 24 years her senior and his girlfriend - and they now live happily together as a 'throuple'.

Gabrielle Reese was just 18 when she travelled to met Jacob Boswell and Megan Muirhead after meeting them on a sugar daddy website.

Now 21, the graphic designer has been living with the couple for the last three years, and while she claims they are very happy she admits jealousy is a big threat in their relationship.

Gabrielle spoke to Jacob and Megan online for three months before arranging to meet, having warned her own parents years earlier that she planned to marry someone their age.

Recalling their first encounter, which involved her travelling from her home in Idaho, northwestern USA, to Salt Lake City, Utah, Gabrielle, who is bisexual and said she has always liked "older men," explained: “I did lose my virginity that first weekend.

“We never really discussed that as the plan, but we were all interested and open to the idea.

“The whole thing was exciting and new. We all clicked very fast and there was a lot of chemistry - we were all involved that first night.

“There were definitely positives. Jacob and Megan are both older, while I had no experience.

“Losing my virginity to a guy and a girl, being bisexual, I got to experience all aspects of my sexuality, too. Girls are soft, delicate and nurturing, while men are more dominant.

“I'd never thought that much about how I would lose my virginity, but I guess it wasn’t what I predicted. I don’t have any regrets though - we’re still here three years later.”

Gabrielle admits she was a late developer as "always liking older guys" stopped her from forging any childhood romantic relationships with boys her own age.

So, after turning 18, she joined a sugar daddy website, matching younger women with older men and, in October 2016, found software developers Jacob and Megan - deciding to fly out and meet them a few days before her 19th birthday.

Chris Tang said the force was not able to end the protests alone, saying the unrest would only end if society condemned the violence.

First, she was honest with her parents data analyst Don, 46, who is only a year older than Jacob, and sales associate Kathea, 44.

"My family knew but they weren't too happy," she said. "But I was very, very honest.

"Growing up, I'd warned my parents I wanted to marry someone their age, but I think they thought I was joking.

"I've always known I liked older guys - and girls too - so when I saw on Jacob's website profile that he had a girlfriend, too, he checked all the boxes.

"But I told my parents I was flying from Idaho to Utah for a first date with a couple I'd only Facetimed once before, so I do understand why they were concerned."

When she arrived in Utah after her hour-long flight, Gabrielle spent the first day with Jacob, moving on to become a "throuple" that night and the following day.

"Megan had work, so Jacob and I went to their house and hung out, watching TV and got dinner," she said.

"It was all very normal and that's what we did when Megan finished work too.

"After spending our first night together Megan told me she loved me and she wanted me to move in - I was like, 'Who knows?'

"That first night I lost my virginity and yeah. I was nervous about the whole experience - but in a good way. The nerves were definitely worth it.

"I knew that I wanted to do it. I don't think I could have had a better experience for my first time - it was so intimate and perfect."

Returning home to Idaho after her two-night trip, Gabrielle found herself constantly texting the couple and becoming increasingly keen to join them romantically.

"I asked if they had been serious and they said they were 100 per cent up for me moving in," she continued. "A month later that's just what I did.

"I'd never been in a relationship before, let alone moved states for two people - one of whom was in his 40s and the other a girl!

"This was my first ever relationship, I was moving in after meeting them once, and being invited straight into a shared bedroom - it was a huge adjustment.

"It did feel weird at times, but I think anyone's first relationship does, and at the same time, somehow it just worked."

While the "triad" enjoy a healthy love life, Gabrielle is conscious of outsiders ridiculing their relationship and making out it is purely sexual.

"I've never had anyone say anything negative to my face, but you can see it in their faces as soon as they find out," she said.

"People tend to sexualise it and ask a lot of invasive questions that they would not ask anyone else.

"They ask how it works and whether we are happy - like they have a right to know.

"But with any relationship there's problems and the only difference is we have one extra person.

"An extra person requires extra passion, extra patience and extra compassion - of course we have ups and downs."

Jealousy is one of the main threats to their three way harmony.

"There's definitely been jealously throughout the relationship - it ebbs and flows," Gabrielle said. "It's not a feeling I want to have, so it's something we work on as a triad.

"It's hard not to get those feelings when the other two are going on a date and you're not invited, but you learn to accept it and let it flow.

"Once you come to realise it isn't all about who likes who more - it's about timing - it gets easier.

"For example, Megan works a lot at the moment, so Jacob and I see a lot more of each other. So, if he's had a stressful day and needs to work it out we'll deal with that solo in the bedroom.

"But we have a healthy sex life together. One month we have sex five times a week, another month it will be once a week.

“I’m totally happy being with Jacob and Megan sexually for the rest of my life - I don’t care about anyone else.”

Looking to the future, Gabrielle is keen at some point to start a family.

She said: "I know for sure I want to have children down the line.  I don't know where that is in our future but I think we would all love that.

"Obviously, there's no legal way for us to all marry but a ceremony would be nice at some point."

Yet, despite her love for Megan and Jacob, several months ago, Gabrielle decided to move to a small apartment nearby.

"I needed a bit of independence," she said. "I was so young when I moved out here that I hadn't really seen very much of life.

"But we're coming up for three years as a triad now and we're completely solid.

"My family know how happy I am now and they've come to accept our relationship.

"I think they're just happy I didn't get kidnapped or locked in a basement after that first weekend."

Regarding herself as "monogamous with two partners," Gabrielle does not rule out opening their triad up to further members in the future.

"It's not 100 per cent a closed relationship and if someone ever wants to do that we'll sit down and discuss it, but it's definitely not something any of us could, or would, do on a whim,"  she said.

Meanwhile, Jacob is keen to extol the virtues of polyamory - where people enjoy intimate relationships with more than one partner.

He said: "Being poly is an amazing emotional challenge and, like everything else difficult, it's incredibly rewarding when it works out.

"You've just got to keep working on this incredible, beautiful ride.

"I definitely get more of a reaction from people about the age gap than being poly, though.

"When people hear I have two girlfriends they always go, 'Well done,' but when they hear about the age gap they imply it's not ok, as if I am cradle snatching.

"It's very demeaning, as Gabrielle is smart, brilliant and intelligent - she doesn't need saving. Give her some credit, please.

"It's not been as direct as saying, 'You're a monster.'  It's more subtle, like, why would someone my age want to date someone Gabrielle's age. It's simple - she's hot!"

Megan, who has been in a relationship with Jacob for 11 years, explained that while the couple experimented with dating other women, Gabby was the first to come into their relationship to form a triad.

She said: "I don't share our relationship status with that many people so I can't speak for what other people think about us all too much.

"Jacob and I are almost 15 years apart but people don't have an issue with the age or the polyamory separately - they seem shocked by the whole package.

"Although I didn't lose my virginity to Jacob I guess you could say in a way I we all lost our throuple virginity together."