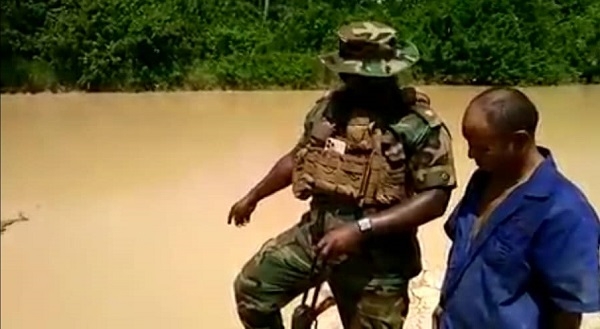 The soldier who arrested the Chinese for illegal mining

A soldier with the Operation Halt team commissioned to fight illegal small-scale mining along the rivers of the country has appealed to the authorities to review the law that says they can only destroy mining equipment within a 100 metres radius of rivers.

According to the soldier, to achieve the desired result of reclaiming the land and restoring the rivers to their natural state, they should be given the mandate to destroy all mining equipment within a two-kilometre radius of the rivers.

The soldier said this in a trending video near a heavily-polluted river with a Chinese galamseyer he had arrested standing by him.

In the video, two large tubes connecting to pumping plants are submerged in the river.

According to the armed soldier, one tube supplies water to an illegal mining site about a kilometre away while the other returns dirty wastewater from washing the gold into the river to further pollute it. 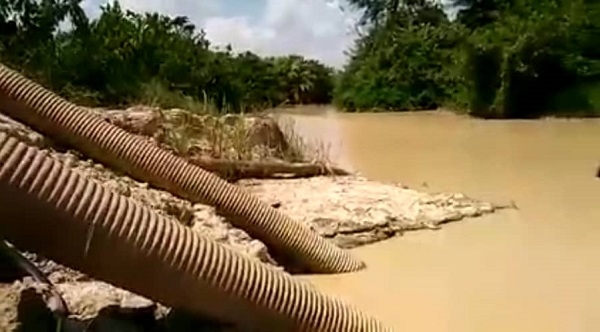 In the video, the soldier narrates: “So, you see, this is the problem; these guys are well-established with machines, plants.

“They have two plants: one supplying water to their site, which is about a kilometre from here, then when they wash the gold, they now discharge the water through the second plant into the river.

“So, one of the pipes is supplying their washing machine, which is about a kilometre from here, and one is discharging water, the wastewater, into the river; polluting the river.

“So, this is the main problem, you see”, he bemoaned, adding: “The guys are operating beyond 100 metres from the river, yet their establishments are causing so much destruction to the river”.

“So, the caveat we are operating with, the 100 metres caveat, is not feasible, it’s not feasible if we need to really deal with this issue head-on.”