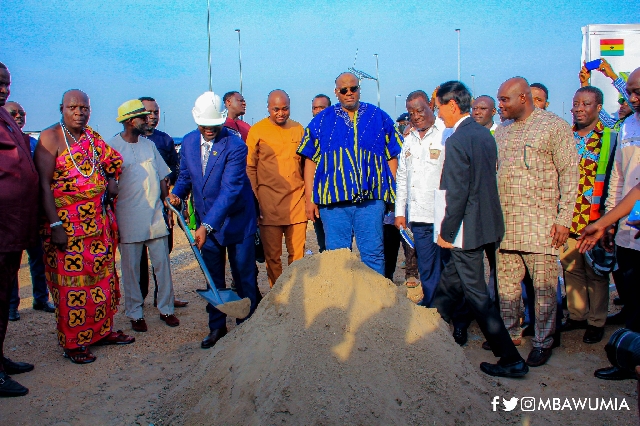 Dr Bawumia with a shovel

The Vice President, Dr Mahamudu Bawumia, has signalled the beginning of construction works on the ‘Improvement of the Tema Motorway Roundabout Phase 2’ project.

The project, which is to provide a third tier on the existing two-tier interchange brings to over 12, the number of interchanges that the Government of President Nana Addo Dankwa Akufo -Addo has either completed or is working on.

According to officials of the Ministry of Roads and Highways, the Improvement of the Tema Motorway Interchange Phase 2, expected to be completed in 30 months, will involve the construction of a viaduct to link the Tema Harbour Road towards the Ashaiman roundabout on the Akosombo Road.

The grade separation will improve traffic flows around the Tema Motorway roundabout.

Other road and traffic flow improvement works are also in the offing, Vice President Bawumia disclosed.

“As part of measures to improve traffic flow between Tema and Accra, the Accra- Tema Motorway will be upgraded into a ten-lane facility. The Phase 1 of the project will be between Tema Roundabout and the Tetteh Quarshie Interchange. The works will include a four-lane, concrete pavement expressway; 3 lane asphaltic concrete service roads on either side; construction of Lashibi, Community 18 and Teshie Link Interchanges and the remodelling of the Tetteh Quarshie Interchange.

“Financing arrangements are being finalized for the works to commence soon,” he hinted.

Dualization of the Beach Road Phase 1 between Osu and Nungua with the provision of bridges over the Kpeshie and Songor Lagoons is also ongoing, with the Phase 2, which involves dualization of the Beach Road from Nungua to Tema Community Three and includes the construction of a three-tier interchange at Nungua and widening of the railway bridge towards Sakumono is at 82% completion.

On behalf of President Akufo-Addo and the people of Ghana, Dr Bawumia thanked the Government and people of Japan who through JICA have provided grant funding for the entire works, and urged the Ministry of Roads and Highways, the Consultant as well as the Contractor to ensure that adequate traffic management measures are put in place during Construction to reduce the inconvenience that the works will bring to the travelling public and residents.