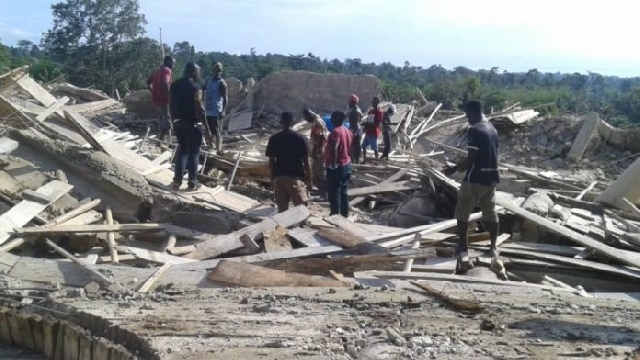 The District Chief Executive of Asene Manso Akroso in the Eastern Region, Mr Alex Inkoom, has said his District Engineer revealed to him only on Tuesday, 20 October 2020, just hours after the collapsed of a three-storey church at Akyem Batabi – which has killed, at least, six people, so far – that he (the Engineer) had warned the church of the looming danger two weeks earlier after passing through the area.

According to the DCE, the District Engineer told him that he warned the church members and leaders during that visit that the structural integrity and engineering of the building, which has intermittently been under construction since 1994, was dangerous.

The church members, according to the DCE, retorted that they believed in God to protect them and also expressed faith that so far as they had Prophet Akoa Isaac as their spiritual leader, they were more than safe.

The congregants of the Church of Prosperity, numbering more than 60, had converged on the church premises to pray and fast for their founder, who had been taken ill, when the incident happened.

More than 30 of the congregants survived and were rescued from the rubble but some 20 others were feared trapped under the debris.

First responders, including personnel from the Akim Oda Divisional Police Command, the Ghana National Fire Service (GNFS), Ambulance Service, and National Disaster Management Organisation (NADMO) have been racing against time to rescue those trapped under the rubble.

The disaster occurred around 2: 30 pm on Tuesday.

So far, all the dead victims are adult females.

Local reporters say only an excavator is on the scene helping with the search and rescue efforts.