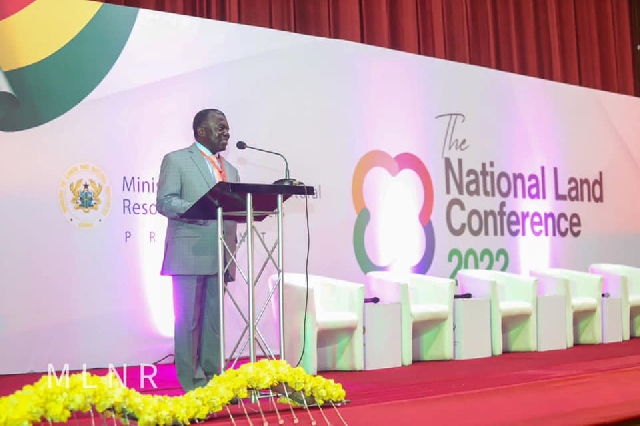 The Deputy Minister of Lands and Natural Resources, Mr Benito Owusu-Bio, has said the Lands Ministry will establish a multi-stakeholder platform to monitor the implementation of recommendations made after the National Lands Conference, a four-day event scheduled to officially begin on Wednesday 7th December 2022.

Speaking at what can be considered a prelude to the grand opening of the National Land Conference on Tuesday, 6th December 2022, Mr Owusu-Bio said he is hopeful that after the four-day conference, solutions will be found for some of the most pressing land issues in Ghana.

The Deputy Minister responsible for Lands and Forestry noted that he is also expectant that at the end of the conference, the awareness of conference participants will be raised about the Land Act of 2020 and the Land Use and Spatial Planning Act of 2016.

Mr Owusu-Bio gave participants an idea of the form the conference will take, detailing that "the four-day conference with many seasoned speakers from various disciplines within the land sector will have three high-level policy dialogues on the political economy of land policy and land governance reforms, land use planning and spatial development, and land administration and innovative methodologies.

"There will also be a number of technical sessions that will address specific issues in land administration through presentations by experts in various fields," he added.

In his statement, the Deputy Minister revealed that aside from the Land Administration Project, which was one of the most impactful projects of the government, a few other interventions have been taken on by the government through the Ministry of Lands and Natural Resources, its agencies and development partners to make land administration visibly better for both administrators and end-users.

Hammering on the need and importance of the Conference, he said urbanisation, technology, population growth, and current world affairs have introduced new challenges to land administration that need to be tackled and, therefore, it is imperative to have a platform where stakeholders can fully deliberate on innovative and sustainable solutions to these challenges. "This is why this conference is so important."

He humbly requested the officials to attend the opening ceremony slated for today, Wednesday, 7 December 2022 at 10 am with President Nana Addo Dankwa Akufo-Addo as the special guest of honour.

In a short statement, the national chairman of the Lands Commission, Mr Alex Quaynor, indicated that the conference offers a unique opportunity for all stakeholders to contribute toward the fashioning of a new land policy.

He was of the view that the Conference is one that is long overdue as the Land Policy 1999 ought to be reviewed and with such a platform, he is expectant that better deliberations will be made and yield results that will help better manage the Lands sector.

The Chairman, however, cautioned that the discussions should not end with the conference or at political levels but continue at all levels of operations.

"Let's not leave it at the political level but we must continue this conversation everywhere and show leadership in the management of stool and family Lands," he stated.

Representatives from the World Bank, development partners and academia were also given the opportunity to make some comments.