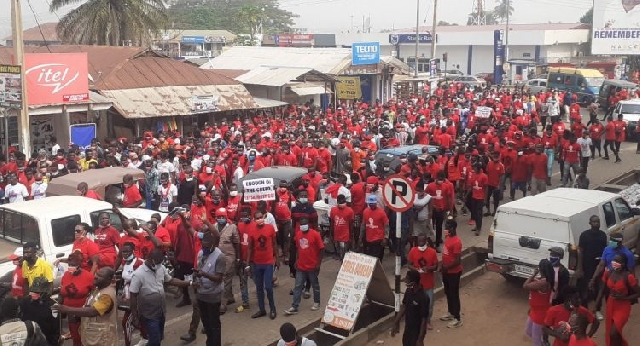 Residents of Ketu South in the Volta Region today, 27 September 2022, embarked on a demonstration themed: ‘Mie Kukum’ translated as ‘We are dying’ against Seven Seas Salt Limited’s Salt Dykes.

The demonstrators are calling on government to halt the operations of the company to curb deaths in the community.

The demonstration started from Akame and the Denu Lorry station.

Residents were seen clad in red wielding placards some of which read; ‘The Indian man is killing us; mie kukum.’

Some were seen dancing and singing war songs in Ewe and shouting “mie kukum.”

The dyke is reported to have killed dozens of people, the recent being a mother, her two children and one other child.

The 41-year-old woman, Yawa Afenu and her two children and another child who was staying with the family, died in a dyke on the Keta Lagoon in Laklevikope, in the Ketu South Municipality, allegedly belonging to Seven Seas Salt Ltd.

The family, comprising, father, mother and the three kids, are reported to have gone fishing in the lagoon, Saturday, 17 September 2022.

However, the father of the children, Atitso Amewu, managed to swim to safety.