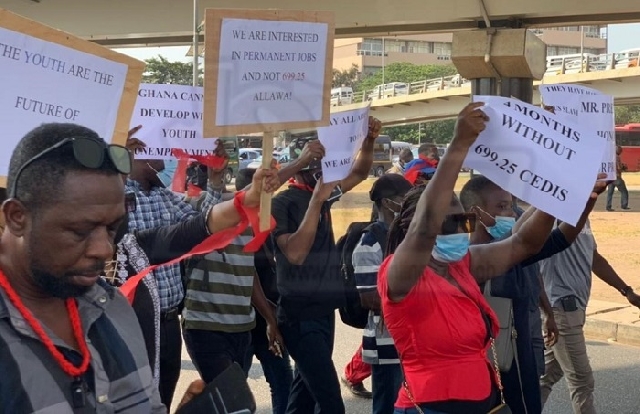 According to the former trainees, the Finance Minister has performed abysmally in managing the country’s ecomomy, as allowances due its members stand in arrears

The Coalition of Nation Builders Corps (NABCO) Trainees has added its voice to calls for Finance Minister, Ken-Ofori Atta step down as the manager of the country’s economy.

According to the former trainees, the Finance Minister has performed abysmally in managing the country’s ecomomy, as allowances due its members stand in arrears.

A statement issued by NABCO, on Monday, 21 November 2022, said: “The Finance Minister who is always seen in his public speeches quoting biblical verses to justify godliness perversely released GHS25 million for the construction of a mere temple (National Cathedral) as his partial commitment to the service to God when NABCO Trainees were owed 10 solid months’ arrears and were in shock and starving to death.”

The Coalition noted that: “This attitude of the Finance Minister is not only a disservice to humanity but a clear perverted disservice to God, a direct person and distortion of true religious principles.”

It further noted that the Finance Minister, “in his 2022 mid-year budget presentation, ordered the closure of the NABCO programme without specifying reasonable timelines for the payment of all arrears as a means of mitigating inter alia, his abysmal performance of managing the economy.”

It indicated: “We fully support the removal of the finance minister.”

“To the President, Nana Addo Dankwa Akufo-Addo, Money likes noise (Sika p3 dede) pay our monies for us to celebrate the Christmas festivity and plan our lives,” the statement added.