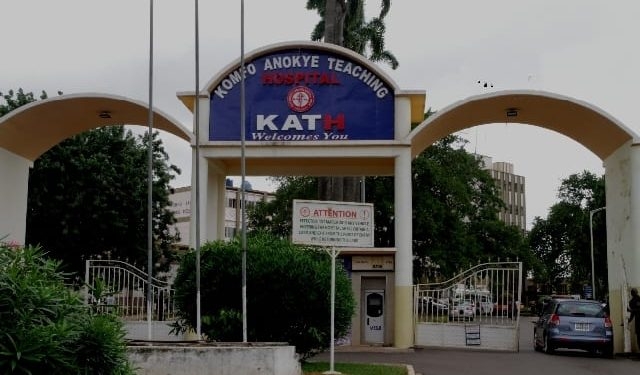 Some residents of the Ashanti regional police barracks in the Kumasi metropolis are complaining about the stench emanating from a leaking septic tank of the Komfo Anokye Teaching Hospital (KATH).

The leaking tank of the Eye Clinic of the hospital shares a fence wall with the police barracks.

The stench is unbearable, according to the residents.

A visit to the area saw stench-riddled water flowing from the tank through a local football field of the barracks, making the neighbourhood unconducive.

Residents who use the route to school and their workplaces have no option but to cover their noses and walk through the sludge, which is suspected to be excreta.

Despite several complaints channelled to the management of the hospital, the affected residents told Class 91.3 FM's Elisha Adarkwah that nothing has been done about it.

Unhappy with the situation and the unhealthy condition they are experiencing, the residents called on the management of the hospital to do the needful by fixing the problem.

Meanwhile, flood waters from the hospital as part of last Wednesday's heavy downpour collapsed part of the hospital's fence wall and in the process entered the rooms of some of the occupants of the barracks and destroyed their properties.

Speaking in an interview with Odeshyieba Kweku Essuman, the sit-in host of the Ghana Yensom morning show on Accra100.5FM on Friday, September 30, 2022, Mr Kwame Frimpong, KATH’s Public Relations Officer denied the claims of the residents.

He said the water is not emanating from a septic tank but downstream water from the hospital.

He said steps have been taken between the management of the hospital and the police regional command for a drain to be constructed to hold the volumes of water.

He noted the police command responded and said they are waiting for clearance from the police high command for an assessment for work to begin on the project.

He further accused the residents of blocking perforations in fence walls leading to the collapse of the wall.