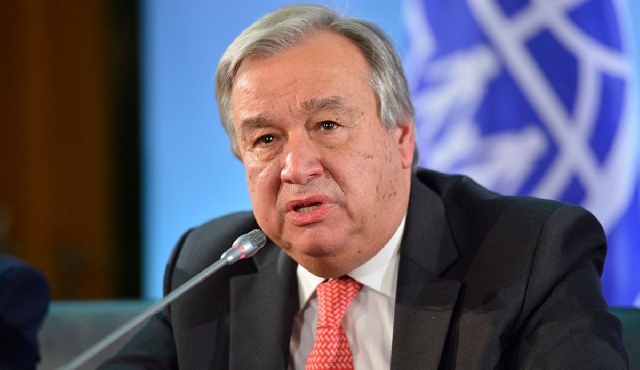 UN Secretary-General António Guterres has urged governments across the world to quickly invest in quality job creation the and the provision of social protection for those without coverage.

Guterres was speaking at a high-level session to discuss the Global Accelerator on Jobs and Social Protection for Just Transitions initiative during the UN General Assembly meetings in New York.

He told leaders to focus on concrete solutions to implement the initiative and warned, “the path of inaction leads to economic collapse and climate catastrophe, widening inequalities and escalating social unrest. This could leave billions trapped in vicious circles of poverty and destitution.”

The initiative, launched in 2021 by the United Nations International Labour Organization, brings together governments, international financial institutions, civil societies, the UN, and the private sector to create 400 million new, decent jobs, especially in the green, care, and digital economies, and extend social protection to more than 4 billion people worldwide that are currently without coverage.

The session was also addressed by various leaders from around the world including the President of the African Development Bank Dr. Akinwumi Adesina, Malawi’s President Lazarus Chakwera, Uganda’s Vice President Jessica Alupo, and Egypt’s Minister for Planning and Economic Development Hala El-Said.

The UN chief praised Togo for protecting thousands of its citizens during the Covid-19 pandemic after deploying “innovative digital solutions to expand social protection to hard-to-reach populations.”

On its part, South Africa was praised for launching the Just Energy transition partnership, signaling an important step in the fight against climate change.

African Development Bank President Dr. Akinwumi Adesina highlighted the bank’s rapid response to the Covid-19 pandemic by launching a $10 billion facility which helped provide social protection for more than 28 million people. The bank also launched a $3 billion social impact bond on global capital markets in 2020, which at the time was the highest in world history.

“But that is not enough”, Dr. Adesina added, “We have to restructure our economies to be productive with education, infrastructure, energy and making sure we have productive sectors that can use people’s skills and absorb that into the economy.”

“At the African Development Bank, we have taken a proactive approach job, jobs, jobs approach,” said Adesina. As an example, he named the bank’s Jobs for Youth in Africa program to create 25 million jobs by 2025. Nearly half of those jobs had already been delivered, he said.

To generate more jobs, Adesina cited sectors such as agriculture where the bank is investing $25 billion to transform rural areas and turn the sector into a business.

In the energy sector, Adesina gave the example of the Sahel region. “We are investing $20 billion to build 10000MW of electricity that will provide energy for productive use and create millions of jobs,” Adesina said. He added it was time for Africa to build a manufacturing capacity for polysilicon material that is used for solar panels “so that we can create a lot of green jobs.”

The creative industry especially Nigeria’s film industry, popularly known as Nollywood, is another area that requires significant investment given its potential to generate $20 billion of revenue and create twenty million jobs, Adesina said.

The UN expects each government to commit to the Global Accelerator initiative and its objectives by, among others, developing national policies and integrated strategies for just transitions.

Malawi’s President Lazarus Chakwera said given the financial constraints his country was facing, implementing the initiative would require the support of partners, donors, international financial institutions, and policy support from the UN system.

He said the overlapping crises of the Covid-19 pandemic, climate change and the war in eastern Europe, Malawi is left “to grapple with downgrades of our sovereign credit ratings, leading to higher borrowing costs and intensified debt risks.”

President Chakwera said his country was ready to be part of the fact-finding work of the Global Accelerator initiative.

Uganda’s Vice President Jessica Alupo said her government has initiated efforts to increase jobs for Uganda’s under 30 who make up 75% of the country’s population.

“We are increasing investment in skills development, supporting informal social enterprises to transition into the formal economy and supporting the private sector to create jobs in key growth areas, including providing incentives to investors,” she said.

Egypt’s Minister for Planning and Economic Development Hala El-Said outlined various initiatives undertaken by her government to mitigate the impact of crises on people in Egypt.

“These include increasing beneficiaries of the cash transfer program to reach 5 million families in addition to substantially increasing food rations that benefit more than 64 million Egyptians,” she said.

“The government has embarked on an ambitious program, the Decent Life Initiative, to revamp the rural communities, and transform the lives of the more than 50 million Egyptians across 4,500 villages, constituting more than half of the total population,” she added.