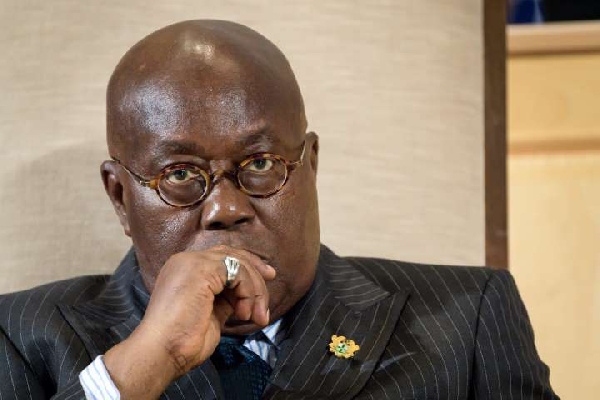 Pressure group OccupyGhana is calling for the removal of the tax exemption privilege enjoyed by the president in the wake of the current dire economic situation of the country.

“Let the president pay income taxes too. We should remove the tax exemption granted to the President under article 68(5) of the Constitution. While the actual savings from this might not be much, it is hugely significant and relevantly symbolic. The president must lead by example. When he pays his taxes, then he can demand that the rest of us pay taxes, too”, OG said.

As part of measures to breathe life into the economy, the government has launched a debt restructuring programme which labour unions and the securities and investment industry have kicked against.

Under the Programme, domestic bondholders have been asked to exchange their instruments for new ones.

Coupon payments will be semi-annual.

Reacting to these measures, OccupyGhana, in a statement, said it considers the debt restructuring programme as nothing more than an offer from the Government to institutional portfolio investors to accept new terms that vary the terms under which the latter acquired the government’s securities, adding: “We think that the Government has no power under the law and the Constitution to unilaterally impose fresh terms on portfolio investors; negotiation and the mutual consent of all parties will be required.”

OccupyGhana has therefore made 10 recommendations to the government among which include the removal of the tax exemption the president enjoys.

“Let the President pay income taxes too. We should remove the tax exemption granted to the President under article 68(5) of the Constitution. While the actual savings from this might not be much, it is hugely significant and relevantly symbolic. The President must lead by example. When he pays his taxes, then he can demand that the rest of us pay taxes too,” OG said in its statement.

The group also reiterated several calls on the president to reduce the size of his government.

Below are details of OccupyGhana’s full statement:

While IMF support depends on the proposed ‘haircuts,’ they are extremely painful to the many Ghanaians who have participated in these investments.

Simply, under this Government’s watch, Ghana has become broke under circumstances that were avoidable and are inexcusable and unpardonable.

As we stated in our press release dated 28 October 2022 (Our ref: OG/2022/050) and titled GHANA’S CURRENT ECONOMIC SITUATION – OUR THOUGHTS AND PROPOSALS, the nation would not be in this situation but for the government’s failed, risky economic strategy that borrowed heavily from the international market to fund expenditure, pay maturing debt, support the cedi and possibly control the effect of the depreciation on inflation.

This risky strategy effectively relied on good fortune and extremely astute economic management, both of which failed.

Thus, although the Government would seek to blame the pandemic and the Russia-Ukraine war for this disaster, it cannot evade or avoid the fact that our debt was unsustainable even before these external factors kicked in and compounded an already precarious situation.

We have two broad comments on the announcements that request Ghanaians to forego legitimately earned funds to help the Government out of the disaster it has created.

First, we consider the finance minister’s announcements as nothing more than an offer from the government to institutional portfolio investors to accept new terms that vary the terms under which the latter acquired the Government’s securities.

We think that the Government has no power under the law and the Constitution to unilaterally impose fresh terms on portfolio investors; negotiation and the mutual consent of all parties will be required.

Second, notwithstanding the claims that individual investors are insulated from the proposed ‘haircuts,’ the millions of Ghanaians whose funds (pension or otherwise) have been invested by institutional fund managers in Government securities, will be the ultimate losers in this new offer.

That is because those fund managers will simply pass the cuts on to their clients and customers.

There is simply no way to understate the terrible consequences that this state of affairs has caused and will cause to Ghanaians.

That is why we believe that any offer to the citizens, who are already hit with the multiple effects of inflation and cedi depreciation, to essentially bail the government out of its self-afflicted disaster, must come with an acceptance of failures and a firm commitment to do better.

We, therefore, recommend 10 things that the government may act upon.

First, reduce the number of government appointees by at least fifty per cent.

This may be achieved by consolidating several ministries and slashing the number of political appointees (ministerial and otherwise), such as all deputies and the like, and entrusting public servant-technocrats with the responsibility of supporting substantive heads.

This will send a powerful message in these tough and painful times that the government is serious about its commitment to doing better while requesting sacrifices from the general public.

We should remove the tax exemption granted to the president under article 68(5) of the Constitution.

While the actual savings from this might not be much, it is hugely significant and relevantly symbolic.

The president must lead by example.

When he pays his taxes, then he can demand that the rest of us pay taxes too.

Third, it is time to rationalise the so-called ‘article 71 benefits.’

Ghana needs to end the three-decade-old grand conspiracy among the political class that milks Ghana under the false argument that article 71 authorises so-called ‘ex gratia payments.’

We must also immediately end the false scheme by which successive governments deliberately delay the setting up of the emoluments committee till the end of their terms, so that salaries and emoluments are agreed upon and calculated literally at the ‘midnight’ of the outgoing government, considered and adopted in secrecy to precious little debate, and then applied retrospectively.

Ghanaians only get to find out the huge pay-outs to the executive and legislators after the fact.

We demand that the committees are established at the start of each government so that we know what and how much the political actors are entitled to when they assume office.

The current government must establish the committees NOW.

Fourth, revise all tax exemptions, especially those granted to incomes and gains from portfolio investments.

The government must, as a matter of urgency, amend section 7(1)(p) to (v) of the Income Tax Act, 2015 (Act 896) to remove all or some of the exemptions on incomes and gains from portfolio investments.

These are not normal times, and we propose imposing a specific, time-bound withholding income tax regime on such earnings.

Ghana may consider re-granting the exemptions when we have recovered.

In addition, the legal sanctions for under-reporting and tax evasion must be drastically applied.

Sixth, explain the source of funding of the proposed Financial Stability Fund (FSF).

Extreme transparency of the proposed programme and its implementation is required.

If the government is broke and requires an IMF bailout, where will the monies for the FSF come from?

The government must show some seriousness in pursuing those the Auditor-General has found to have caused loss to Ghana.

To the best of our knowledge, the government is doing nothing to enforce the Auditor-General’s disallowances and surcharges.

The president issued a terribly belated instruction to heads of institutions to provide to him the names of all persons identified to have caused losses to the state in the Auditor-General’s reports.

The president’s deadline has come and gone with no communication or indication on whether the names were indeed supplied to the president, and what the president is going to do with them.

The government has to address the galamsey menace as a matter of urgency, as our natural resources are plundered and the ecosystem destroyed.

The much-publicised Kumasi meetings do not appear to have borne fruit.

We have written to the president, at least, 9 times in the past six weeks, in addition to several other previous statements on this, challenging the government to properly regulate artisanal mining in a way that benefits the nation.

They have all been ignored.

Our current efforts will come to nothing if this canker is allowed to overcome any future economic recovery.

And, the government must provide monthly reports on how much money all announced cost-saving measures have delivered.

We specifically recommend the suspension of all fees and allowances paid to persons appointed by the government to serve on various boards.

We also recommend suspending all expenditures on the proposed National Cathedral.

Whatever arguments there might have been to support spending now-non-existent money on the proposed National Cathedral, have been eroded by the dire straits that the nation faces.

Our current situation makes the continued commitment in the budget to spend GHS80M on the cathedral, look like a vanity project.

We lose nothing by suspending expenditure on that project until the economy recovers.

This includes the Free SHS scheme.

Every Ghanaian who can pay fees should pay.

Limit the scheme to only those who can prove that they are not capable of paying fees.

In conclusion, a government that is pleading with Ghanaians to bail it out of a self-afflicted disaster, must ‘bear fruits worthy of repentance.’