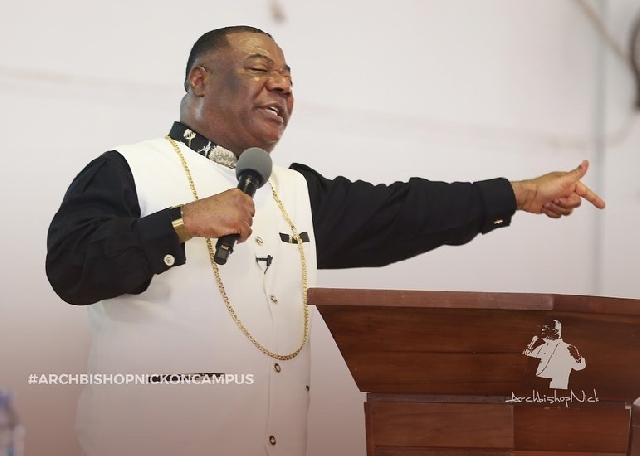 Christians must pray for the 2020 elections to be divinely determined by God; Archbishop Nicholas Duncan-Williams has urged.

According to him, if Christians do not speak out, the elections would be determined by blood sacrifices offered to the powers of darkness.

In his second sermon on Sunday, 19 January 2020 at Action Chapel International, Archbishop Duncan-Williams said: “We’re in 2020 elections” and “people are predicting the outcome already and Christians are sitting down saying nothing, leaving it to politicians”.

“You have to speak out”, he urged the Church.

“People ask me: ‘Papa, what do you think about the elections?’ I say: ‘The will of God shall be done’. And they say: ‘How do we pray?’ And I say: ‘Pray and command a divine outcome’”, the founder of Christian Action Faith Ministries said.

“Let the Council of God, let the decree of the watchers determine the outcome of the elections, not the consultations with fetish priests and the shedding of innocent blood and the blood of animals but let the word of the Lord, let the Council of the Lord, determine the outcome of the 2020 elections and not consultations and visitations of the powers of darkness”.

“Say: ‘Let God arise over 2020 elections and let His enemies be scattered’”, he charged the congregation.