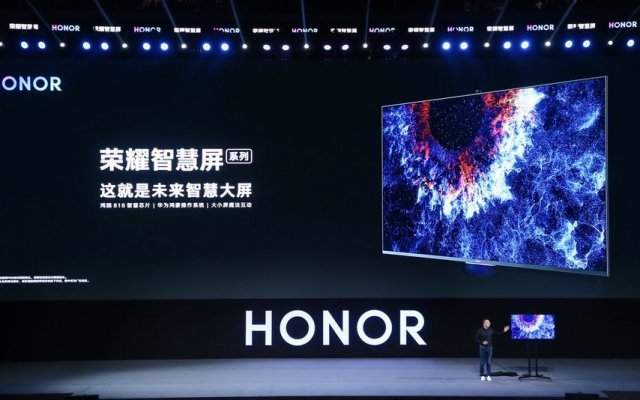 Honor, which is a subsidiary of Huawei, calls Honor Vision a "smart screen" product that's more than just a television set. In shape and size it is a 55-inch TV, however, the focus is not so much on the screen, but on the massive amount of smart features that Honor has built into it. It's worth noting that this is the first smart TV product for Honor, which has so far focused on smartphones and accessories.

Highlights of Honor Vision include a pop-up camera that uses a Huawei neural processing unit (NPU) for face recognition, body tracking and posture detection, extremely fast image sharing from a smartphone (100 times faster than via Bluetooth, Honor claims), and controlling other smart home devices on the TV's screen.

The TV is also equipped with Huawei's fast Wi-Fi chipset that supports a download rate of up to 1.7Gbps, as well as the company's Honghu 818 octa-core display chipset, which supports technologies such as HDR, local dimming and noise reduction.

Honor Vision comes in two variants, with the basic specs being the same — a 55-inch screen with a 4K resolution, HDR and 2GB of RAM. The biggest difference is in storage memory: The 16GB variant costs 3,799 yuan ($538) while the 32GB variant costs 4,799 yuan ($679). The device will launch in China first, and probably won't make it to the U.S. given Huawei's tense relationship with the American government.

Honor Vision will be present at the IFA trade show in Berlin in September, and we'll be there to check out how it works in real life.