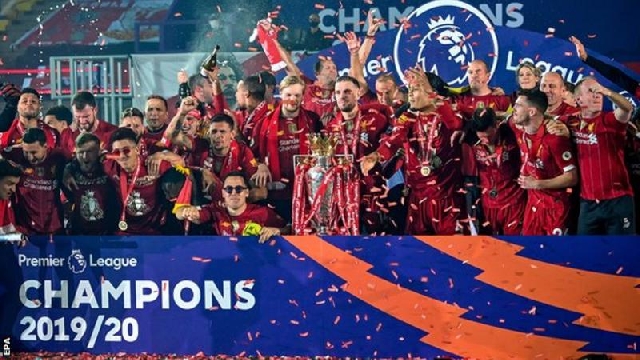 Liverpool are champions of England

Liverpool captain Jordan Henderson lifted the Premier League trophy on the Kop at a near-empty Anfield to mark the club's first top-flight triumph for 30 years.

Henderson received the trophy from Reds legend Sir Kenny Dalglish, who was manager when Liverpool last won it in 1990, during a spectacular ceremony after the champions beat Chelsea 5-3.

Liverpool were confirmed as champions on 25 June with seven games to spare, when nearest rivals Manchester City lost at Chelsea, but they had to wait until their final home game of the season to be presented with the trophy.

They did so in front of their families, who were given special permission to attend the trophy presentation.

"We've been waiting a long time," said Henderson, who is recovering from a knee injury. "Walking up there was amazing, the lads deserved the moment and thankfully the families were watching.

"To crown it off like that was really special."

There were no supporters in their 53,000-capacity Anfield home after the Premier League season resumed on 17 June behind closed doors following a three-month suspension because of the coronavirus pandemic.