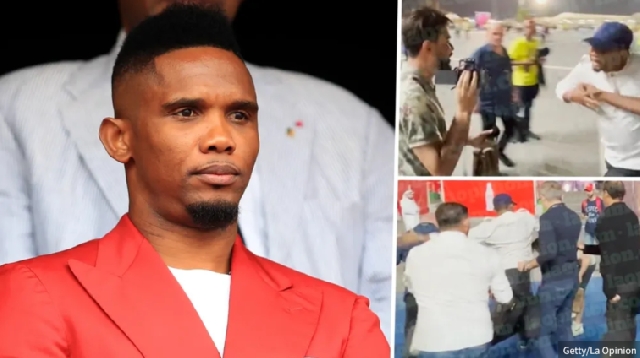 Samuel Eto’o has been caught on camera kneeing a photographer in the head at the 2022 World Cup in Qatar.

The Cameroonian legend has been a regular at games in the Middle East and was in attendance once more for Brazil’s last-16 showdown with South Korea.

While many walked away from that contest happy after seeing the Selecao put in a dazzling display of attacking intent during a 4-1 win, Eto’o found cause to pick an argument with a cameraman outside the venue and became caught up in a violent scuffle, with La Opinion catching the shocking incident on camera.

THE BIGGER PICTURE: Eto’o is a legend in his native Cameroon, having scored more goals (56) for his country than any other player, and collected several major honours during a club career that took him to places such as Barcelona, Inter and Chelsea.

WHAT NEXT? While Eto’o was clearly wound up after Brazil’s latest outing in Qatar, the Selecao impressed many with their free-flowing football and eye-catching dance moves, with the South Americans beginning to move through the gears in pursuit of a sixth global crown.