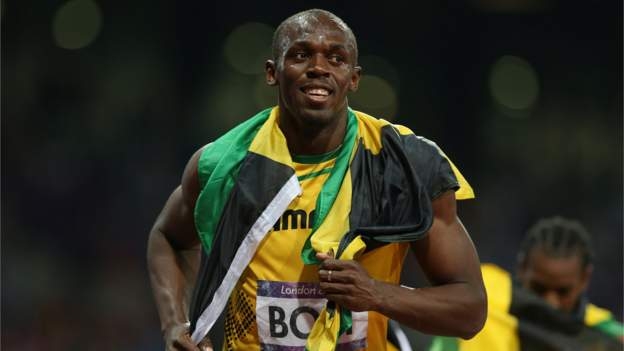 Eight-time Olympic champion Usain Bolt says it is "too late" for a comeback but admits he has "got that itch" for a dramatic return to the sport.

The Jamaican, 35, ended his glittering track and field career in 2017.

He says he was tempted by a possible return for the Tokyo Games, but his coach persuaded him otherwise.

"It's too late. If I was going to come back it would have been to be for this Olympics," he told BBC Sport's Ade Adedoyin.

"When I told my coach I was going to retire he sat me down and said 'when you retire that's it. I'm not doing any comeback tours, nothing. So make sure you are ready to retire'.

"I remember I went to him in 2019 and said 'what do you think about coming back for the Olympics?' And he looked at me and said 'don't even start'.

Bolt also believes the rivalry between female Jamaican sprinters Shelly-Ann Fraser Pryce and Elaine Thompson-Herah could lead to one of them breaking the 100m and 200m world records, set by American Florence Griffith Joyner in 1988.

Thompson-Herah successfully defended her 100m and 200m Olympic titles in Tokyo and took her 100m personal best down to 10.54 in Eugene last month - just 0.05 seconds short of Griffith Joyner's record of 10.49.

"When I saw the girls really stepping up, and really running fast I thought 'this could really happen'," said Bolt.

"Elaine's technique has really improved and the same with Shelly-Ann. She runs much more upright and her fluency looks way better. So I think these girls are going to be knocking on the door.

"People have talked about this record over the years. So if they can break it would be massive for the sport."

'Ronaldo is a machine'

Away from athletics, Bolt is also a huge Manchester United fan and, like most Red Devils supporters, he is eagerly awaiting Cristiano Ronaldo's first appearance since his dramatic return from Juventus.

"It's a massive deal to see him back," he said. "Cristiano demands a lot, so he will demand a lot from these players and it will only make them better. He's on a different level, he is a machine.

"I think he will play until he's 42 because he will always be so fit and on a higher level to a lot of the younger players because of the work he puts in and the dedication he has."

From world records to music records

After a brief spell as a professional footballer Bolt is now embarking on another post-athletics career - music.

He has produced and stars in his own reggae album alongside his best friend Nugent 'NJ' Walker.

And just like on the athletics track, he wants to be the best.

"I'm aiming for the top. I want to win a Grammy, get a platinum album or single," he said.

"I want to reach the pinnacle and be in a room where all these big producers talk about my music.

"We know it is a long journey and there is a lot more to learn, but we are just enjoying the process."