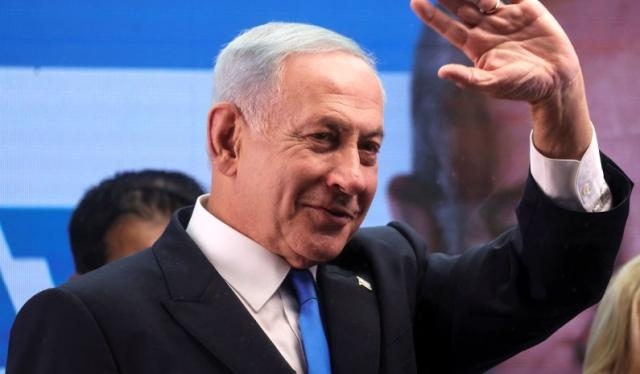 The projections give his right-wing bloc a slim majority of seats over his centre-left opponents led by current Prime Minister Yair Lapid.

Such a result would mark a dramatic comeback for Mr Netanyahu, toppled last year after 12 straight years in power.

"We are close to a big victory," he told jubilant supporters in Jerusalem.

The election was widely seen as a vote for or against Mr Netanyahu's return.

The exit polls suggest his bloc will command 61 or 62 seats in the 120-seat Knesset (parliament).

With just under 85% of the votes cast on Tuesday counted, it was projected to pick up as many as 65 seats. However, that could change as the remaining ballots are processed.

In order to secure a parliamentary majority, Mr Netanyahu and his Likud party will be dependent on the support of the far-right, ultra-nationalist Religious Zionism party.

Its leaders have gained notoriety for using anti-Arab rhetoric and advocating the deportation of "disloyal" politicians or civilians.

"We have won a huge vote of confidence from the people of Israel," he told his cheering supporters.

Since the exit polls were announced hours earlier when voting ended, the room had been a scene of celebration as people jumped up and down, waved flags and chanted Netanyahu's nickname, Bibi. One man repeatedly blew a shofar, or ram's horn, a ritual instrument used by some Jewish people at times of special significance.

At his party's camp in Tel Aviv however, Prime Minister Lapid told his supporters that "nothing" was yet decided and his centre-left Yesh Atid party would wait for the final results. 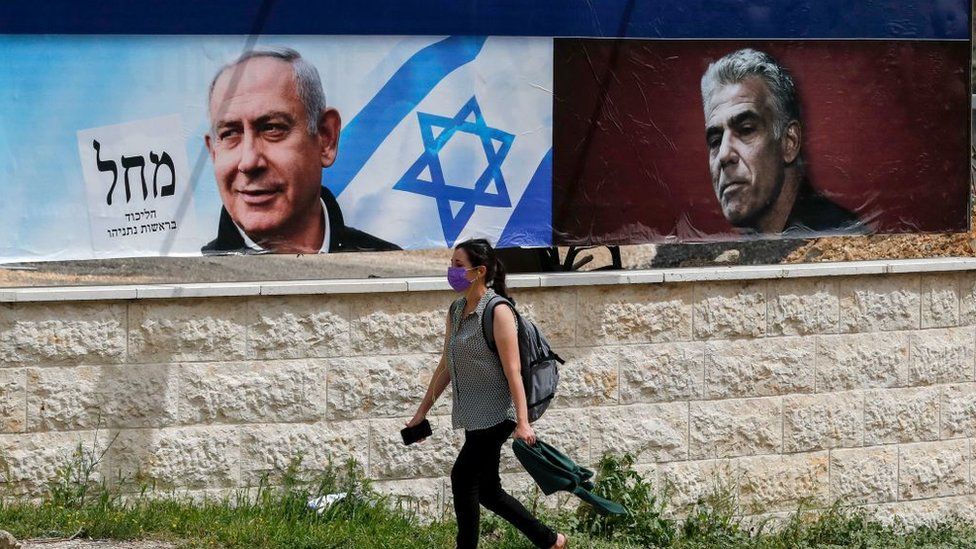 IMAGE SOURCE,GETTY IMAGES Image caption, Mr Netanyahu is forecast to replace Yair Lapid, who toppled him just over a year ago

Mr Netanyahu, 73, is one of Israel's most controversial political figures, loathed by many on the centre and left but adored by Likud's grassroots supporters.

He is a firm supporter of Israel's settlement-building in the West Bank, occupied since the 1967 Middle East war. Settlements there are considered illegal under international law, though Israel disputes this.

He opposes the creation of a Palestinian state in the West Bank and Gaza Strip as a solution to the Israel-Palestinian conflict - a formula supported by most of the international community, including the Biden administration in the US.

Mr Netanyahu is also currently on trial for alleged bribery, fraud and breach of trust - charges he fiercely denies. His possible partners in a Likud-led coalition government have said they would reform the law, in a move which would bring a halt to his trial.

According to the exit polls, Likud stands to be the biggest party, with 30-31 seats, commanding a majority with the support of nationalist and religious parties.

Yesh Atid, which led the coalition which brought down Mr Netanyahu in elections last year, is forecast to win 22-24 seats.

Religious Zionism appears to have won 14 seats, which would make it the third largest party.

"It will be better now," said Religious Zionism supporter, Julian, at the party's venue in Jerusalem.

"When [Religious Zionism politician Itamar Ben-Gvir] will be minister of public security, it will be even better - he'll bring back security to the people of Israel. That's very important."

However, political scientist Gayil Talshir, from the Hebrew University of Jerusalem, warned that if the exit polls "reflect the real results, Israel is on its way to become Orban's Hungary", recently branded an "electoral autocracy" by the EU.

If the polls are confirmed, it will stave off the prospect of a sixth election in just four years after analysts predicted deadlock.

It would mark a remarkable turnaround for Mr Netanyahu, whose political future was widely written off after Mr Lapid formed an unlikely alliance of ideologically diverse parties to take power in June 2021, with the uniting aim of making it impossible for Mr Netanyahu to form a government.

At the time, Mr Netanyahu vowed to bring it down as quickly as possible and one year later the coalition government concluded it could not survive and collapsed after resignations meant it no longer had a majority.