Pakistan appeals for aid as 119 more die in a day 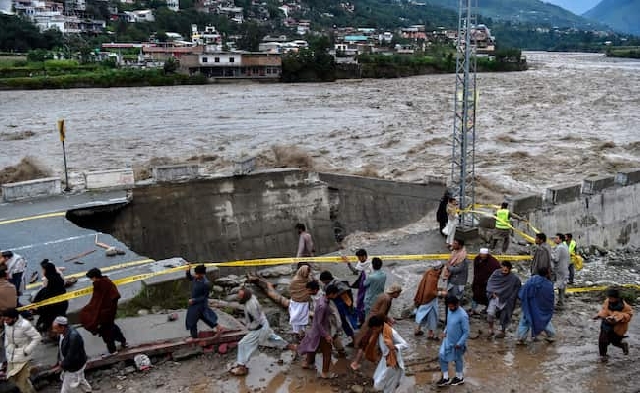 The floods have displaced thousands of people

The death toll from the monsoon rains has reached 1,033 - with 119 killed in the last 24 hours, the National Disaster Management Authority says.

The US, UK, UAE and others have contributed to a disaster appeal, but more funds are needed, officials say.

One man told the BBC his daughter had been swept away by a flooded river.

"She told me: 'Daddy, I'm going to collect leaves for my goat,'" Muhammad Fareed, who lives in the Kaghan Valley in the northern Khyber Pakhtunkhwa province, said.

"She went to the bank of the river and a gush of water followed and took her away."

"Pakistan has been grappling with economic issues, but now just when we were about to overcome them the monsoon disaster hit," he said.

Funding from a lot of development projects had been rerouted to the affected people, he added.

According to reports by the Dawn newspaper, Pakistan's Prime Minister Shehbaz Sharif has announced a grant of 10bn rupees ($45m) for those in the most affected Khyber Pakhtunkhwa province.

Every flood-affected family would be given 25,000 rupees ($112), Mr Sharif said, which would be disbursed within a week.

In the north-west of the country, thousands of people fled their homes after rivers in Khyber Pakhtunkhwa burst their banks, causing powerful flash floods.

"The house which we built with years of hard work started sinking in front of our eyes," Junaid Khan, 23, told the AFP news agency. "We sat on the side of the road and watched our dream house sinking."

The province of Sindh in the south-east of the country has also been badly affected, with thousands displaced from their homes.