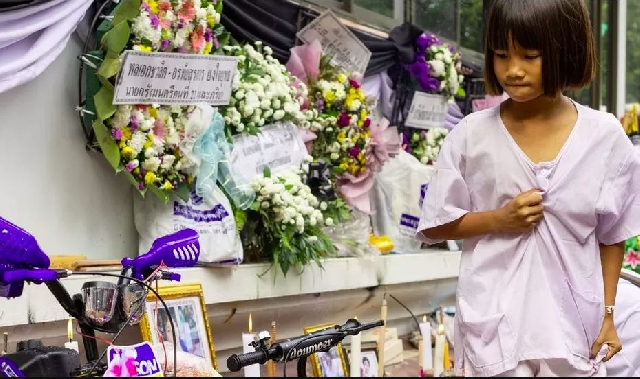 Three-year-old Krissakorn Reungcharoen - who goes by the nickname Mick - has opened his eyes just as his hometown of Uthai Sawan prepares to say farewell to the victims of Thailand's worst mass killing.

Doctors were concerned he would not survive. He had a severe head injury after being slashed by a large knife during an attack that killed 36 people in Nong Bua Lamphu in northern Thailand.

A former police officer Panya Kamrab rampaged through the town armed with a gun and a knife last Thursday. He stormed a childcare centre, killing 23 children, before driving through the streets to kill others.

Near his home, he rammed into Mick, his mother and his grandmother who were all on a tricycle. Then he got out of the car and stabbed them.

In videos shown by Mick's grandfather days later, the boy is covered in bandages and hooked up to several machines in the intensive care unit in Udon Thani, a neighbouring town.

But Mick is alive. He has said his first few words since the attack. He asked for his mother. But 31-year-old Vanida Ruengcharoen did not make it to the hospital.

Her portrait now sits atop a coffin at a crowded temple surrounded by her favourite things.

There are so many coffins that they take up every bit of space in three of the town's temples.

Relatives dressed in black sit in rows of chairs at the front, clutching gilded copies of their lost loved one's portrait. There's a picture of three-year-old Model, a tomboy who was told to wear a skirt to her graduation day which led to frowns in all her photos; of Pattarawut, also three years old, who loved dinosaurs; and of two-year-old Captain whose favourite animal was snails.

Twenty-three toddlers were murdered at the childcare centre. One survived.

This is the last day of four-day long funeral rites - and nearly every household in this town of around 6,000 people will take time to kneel in front of each of these portraits and say goodbye.

Rattan Malapim has been at the temple since sunrise. She rearranges a toy truck and football in front of a portrait of her four year-old son Thanakorn.

She has brought him a treat of donuts for his afternoon snack. She still talks to him: "Did you sleep? Did you manage to eat?"

It's a heart-breaking scene but the act of giving offers her some solace.

Thailand is a majority Buddhist country and keeping the spirits happy is important for relatives. Offering food and doing good deeds is also essential for the dead to live well in the afterlife.

You do not grieve alone here, nor is it quiet.

Loudspeakers blast the names of those who lost their lives while women sit preparing food for the hundreds who will come to say farewell. Outside, traffic police with whistles keep the streets clear for the crowds in black filing to each of the temples to say their final farewells.

Everyone is just trying to find ways to help and to cope.

As one official put it, this community is trying to be strong, just as their hearts are at their weakest.

Mick's grandfather has been visiting the temple to say goodbye to his daughter, and to tell her that her son is alive.

"The bond between them was enormous," says 58-year-old Puan Chaikern. "When I saw them together, it made me happy to see the love they had for one another. I am so shocked at this loss. I still can't process what happened."

His wife is also in hospital and said to be recovering slowly. His neighbour says she is looking out for him and making sure that he is eating - gestures that seem to be typical of this neighbourhood.

As Puan heads back to the shrine to see his daughter, he has one other person to thank - a neighbour who may have saved Mick's life.

When Mick, his mother and his grandmother were stabbed, Varanchai Prapaspong, ran at the attacker with a stick to try to stop him. He was shot and killed.

"My brother was shouting at the attacker: stop, enough, stop hurting them," his sister, Thiwaporn Jandabhut, told us.

"Neighbours said that if my brother hadn't distracted the attacker, many more people may have been lost. People keep coming to pay tribute to my brother and say thank you to him."

How will Uthai Sawan move on?

One local official, who witnessed the attack and did not want to be named, said she can't sleep with all the brutal images etched in her head.

What can help the families who've lost so much, she asked? She worries nothing will ever be normal again.

But for now, this funeral offers at least one way to help as the community finds comfort in familiar rituals.

"Tell the spirits of the children not to worry," she said. "May their souls go to heaven in peace."