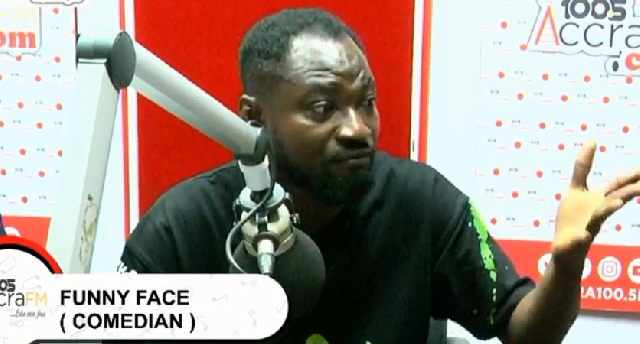 He disclosed this in an in interview with Nana Romeo on Accra100.5FM’s mid-morning show Ayekoo Ayeeko on Wednesday, 5 August 2020.

Funny Face, who was in the studios of Accra100.5FM along with a radio set, noted that he carries the set to enable him play and listen to a song he listens to often to keep him from getting depressed.

Funny Face, who recently separated from his second wife, reiterated his advice to men to be weary of women with big behinds.

He said: “Every man who comes into this world and doesn’t heed advice and you claim you like big buttocks, you’ll die. Every man listening to me, don’t chase big buttocks, big buttocks will kill you. I’m passionate about buttocks.”

The comedian, who also gifted host of the show a bottle of perfume worth GHS 3,500, said: “He’s [Nana Romeo] the only brand that can get me here. I take GHS10,000 before making an appearance at an interview for free. I take GHS10,000.”

The Comedian was in the news recently for fighting with his colleague comedian Lil Win live on TV.