My ‘Wonhuso’ song not for any political party; if you want it, pay for it – Bosom Pyung to NDC, NPP 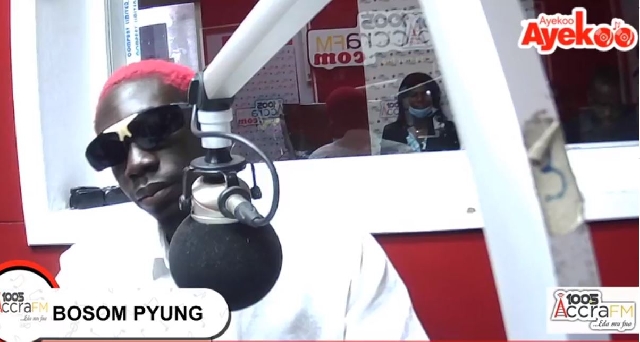 Ghanaian traditional rap musician Bosom Pyung has indicated that his latest song, titled: ‘Wonhuso’, is not targeted at any political party.

He told Asonaba Kojo Nomafo Duku on Accra100.5FM’s mid-morning show ‘Ayekoo Ayekoo’ on Tuesday, 22 September 2020 that the song is applicable to everyone in any kind of situation.

According to the ‘Ataa Adwoa’ hitmaker, some political factions have already started subtly jabbing their opponents with the song.

He said “people have started throwing shades” with the song but it was neither made for the New Patriotic Party (NPP) nor the National Democratic Congress (NDC).

The political science graduate of the University Of Ghana, Legon, however, noted that he is willing to give out the song to whichever side pays for it.

Meanwhile, Bosom Pyung has urged the government to focus on restructuring the system, in terms of equitable distribution of royalties, especially.

He strongly disagreed with the NPP’s 2020 manifesto promise of building ultramodern studios across the country.

“There are a lot of major things the government has to do.

“There are a lot of studios in Ghana,” he noted, adding: “If the government really wants to push the Ghana music industry, I think building studios is not enough”.

“We have to restructure the whole system.”

His debut album is expected to be released in October.