Stonebwoy recorded ‘Pull Up’ verse in a blink, by the beach – MzVee 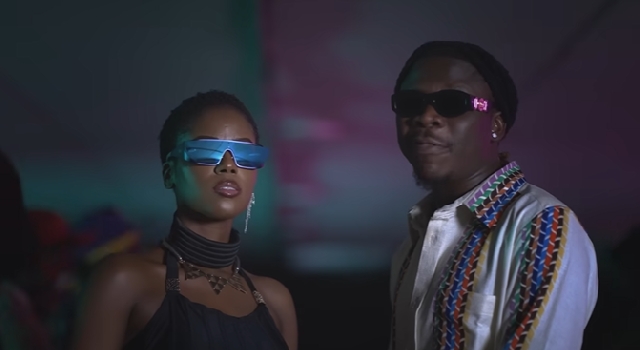 MzVee (L), Stonebwoy (R): A scene from the 'Pull Up' official music video

On MzVee’s new album, ‘10 Thirty’, is a new collaboration with Stonebwoy called ‘Pull Over’.

Speaking to MzGee of 3Music TV, she disclosed Stonebwoy did not hesitate to lend his 30-second fiery verse the moment she requested it.

In fact, though he was out of the country on tour, he set up right after a show he played and recorded the verse for what in public is their third collaboration.

“I call him Efo, he calls me Daavi, so I called him and I was like, ‘Efo, chale, I’m about to drop another bomb o, I just recorded this song, if you’re home, what’s up? Let me show you the song’,” MzVee narrated via a video call.

“And so he recorded it right after his show by the beach and you should see how cool it was where he was recording.

“He did a set up by the beach, and he just put on his headphones and then he started to spit his bars, so it was right away.”

“He never, ever, ever, misses a beat,” the ‘Come And See My Moda’ hitmaker noted.

The BET nominated artiste also spoke on why Stonebwoy is a frequent partner in music and reacted to MzGee’s observation that their collaborations, so far, are released four years apart.

“I don’t know, we just have a very good vibe, it’s just home vibes, you know,” she said.

“I don’t know if it’s because we’re both Voltarian but we just click like that, and the guy is just down to earth,” she complimented the Reggae/Dancehall star nicknamed 1Gad.

The fashionista and beloved performer also revealed that even though ‘Natural Girl’ and ‘Come Over’ were released years apart, “we recorded those two songs simultaneously.”

Another revelation was she saying there is an unreleased song “that Stonebwoy has featured me on, so maybe it’s also going to be dropped four years after this one [Pull Up].”

“I don’t know why, we’re just really cool, we can relate to each other. He’s a very cool dude, very talented, always a pleasure working with him,” she stressed on her rapport and work experience with Stonebwoy.

The party-spirited ‘Pull Up’, a Kizzy Beats-produced Afrobeats number with Dancehall and Amapiano influences, has a Justin Campos-directed video out on YouTube.