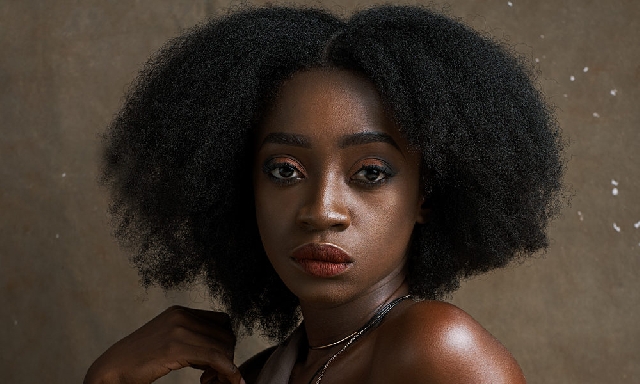 Star singer and actor Adomaa, daughter of a Ghanaian father and Nigerian mother

She said this highlighting how powerful nostalgic feelings are in marketing.

Guesting on The Big Show on Class 91.3 FM, Saturday, 26 November 2022, she reacted to the news of Caveman Watches signing movie veteran Fred Amugi as a brand ambassador and erecting a billboard for him as he had wished for, in a viral video, in light of his 74th birthday – 5 November.

Adomaa also said categorically she would buy a Caveman watch because of what the company has done to honour Mr Amugi and in so doing his mates on the creative arts scene in Ghana.

Speaking to sit-in host Prince Benjamin (PB), the ‘Dede’ TV series star said she saw Fred Amugi’s good news “on Twitter and I almost cried, such a beautiful moment, really really beautiful. I hope we do more for our veterans. They deserve it. They are the reason some of us are still here. They are the reason some of these artists can fly. If they didn’t walk, we wouldn’t be here, so it’s very important that we give them their due.”

“The thing is, if they hadn’t done the work that they had done, we wouldn’t be here, most of us would not be here,” she stressed and noted: “So inasmuch as we understand why brands go for the newer faces because they are more in vogue and more relevant, it’s also important to evoke nostalgia.”

“You know that’s that feeling like, ‘Oh, I grew up with this person’, it’s important and some of them have really really good brands [reputation] still, so, chale, I feel it’s a thing that should be done,” the music creative added before stating she would purchase a Caveman watch because of the Ghanaian company signing Mr Amugi.

“Big shouts to Caveman,” she said. “In fact, after seeing that billboard [of Fred Amugi modelling for the watch company], and the ad on Twitter, I want to buy a Caveman watch.”

“And I feel a lot of brands who do that would honestly see that their sales would actually skyrocket,” she projected.

On her memories working with Fred Amugi, Adomaa recalled an international moment.

“First of all, I was star-struck – this was a project we went to work on in Nigeria. I got there [and] I didn’t know anybody, I didn’t know who was going to come. I got there and I saw him and I was like, ‘Oh my God!’ He didn’t know me at first. Honestly, that was my first time acting outside [Ghana]. I had done only one movie before that which was ‘Bad Luck Joe’. I hadn’t really come out as an actor. He didn’t know who I was but, he was a very very chill person, and has a lot of wisdom to share, and a phenomenal actor. I learned so much from him. Being on set with him was such an honour. I’ve seen him sometimes in some social settings and it’s always like a reunion [and] I’m really happy.”

Returning to the matter of corporate brands engaging veteran actors, she noted that: "It's sad that," Fred Amugi "would have to come," and ask for such a deal. "I feel like it [such engagements] should be instinctive."

"I'm glad that he was brave in doing so,” she continued as she reacted to what some have opined on social media is controversial and somewhat beneath the celebrated actor, “and I am glad that after he did some people are actually taking the initiative to [work with him] and I hope it doesn't just end there. It should cut-across everywhere.”

She nervously laughed when she considered how creatives are sidelined in old age for their juniors. “That’s not encouraging,” the ‘Traffic Jam’ hitmaker bemoaned.

After fighting depression and going on an abrupt hiatus from music, Adomaa has returned with a 7-track tape titled ‘Becoming Adomaa’. The extended play (EP) which details her accidental stardom, struggles with depression, and subsequent recovery and resolve to rise up again, is streaming on all digital platforms now.

The movie and documentary capturing her story and the essence of the new tape will be shown at the Silverbird Cinemas on Saturday, 31 December 2022. Tickets are available on adomaa.com.