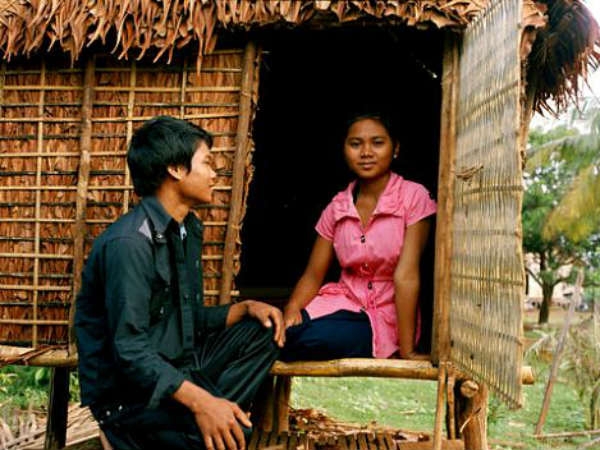 Kreung girl and her suitor chatting at her love hut

In some places around the world, sex, before marriage, is considered a great taboo and the prospects of a teenage girl spending the night with her boyfriend, remains highly unlikely.

But in one village in Cambodia, the culture of love huts of Kreung tribe gave a chance to the young girls to find their best partner.

Basically, it works like this: when young girls reach puberty around age 13-15 their fathers will build them a separate bamboo hut, away from the family home, so they can socialise and experiment with boys in privacy. The Kreung people instil a strong message that sex before marriage is acceptable, encouraged when young girls are trying to find the right man to marry. The girls are in charge. They invite the boys they want into their love hut to get down or sometimes, just talk without any sex. The boys are not aggressive (they have been taught that their respectful behaviour towards the girls will affect their families livestock and they take this very seriously).

When a girl reaches her early teenage years, or possibly even before, the love hut becomes the place for her to meet and get to know boys before deciding on her one true love.

According to villagers, divorce and sexual violence in the community remains non-existent and young women only engage in relationships with those they feel comfortable with.

'The huts provide us independence and are the best way through which we can explore our true lover,' she said.

The traditional love huts are disappearing “as the minority becomes exposed to modernisation and Khmer culture” where premarital sex is not respectable.

When you are cut off from the rest of society it is much easier to preserve your own traditions, no matter what they are.

The traditional love huts are disappearing “as the minority becomes exposed to modernisation and Khmer culture” where premarital sex is not respectable.

The Kreung people have, however, moved on from their previous tradition of using a cocktail of alcohol and a centipede as a contraceptive, and now use condoms.