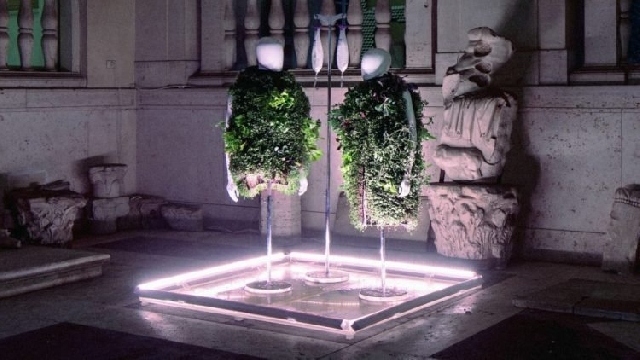 A wearable vegetable garden that can accommodate dozens of different crops

Designer Aroussiak Gabrielian has given the phrase “grow your own food” a whole new meaning by creating a wearable vegetable garden that can accommodate dozens of different crops fuelled by the wearer’s own urine.

Dubbed Posthuman Habitats, Gabrielian’s project was inspired by the vertical, soilless gardens of French botanist Patrick Blanc, and consists of a vest covered with a layer of moisture retention fabric onto which microgreens seeds are directly placed. Apparently it takes about two weeks for the germinated seeds to grow to a level where they can be harvested. And since plants need sustenance to grow, the wearable gardens use the wearer’s urine as irrigation, after it’s treated using a process called forward osmosis.

Aroussiak Gabrielian, an assistant professor of architecture at the University of Southern California, told As It Happens guest host Helen Mann that she has so far experimented with 22 different crops on the wearable gardens, including cabbage, radishes, even strawberries or peanuts. These all come together to create a colourful, fragrant garment that grows as it’s worn.

The project was inspired by the architect’s questions about a future in which our soils and water sources are depleted and with them our ability to sustain crops. How would we be able to grow the nutritious plants required to sustain a growing population? She came up with the concept of wearable vegetable gardens and the idea of using our own bodies for fertiliser and water.

“I guess human waste could also be used, but the waste was coming from the smaller creatures and the pollinators and so forth,” Gabrielian said. “The idea is that your urine would be captured via catheter filtered through a process called forward osmosis — which is developed by NASA technology that currently exists that is used in space, and delivered to the crops as irrigation.”

The irrigation idea is a bit too radical to implement right now, but the designer did wear one of her wearable gardens, and says that the feeling is quite unique. They are quite heavy to carry around once the plants and their fruits start to grow, but it’s the dampness that really makes its presence felt. Gabrielian said that despite wearing an insulating layer, she was still able to feel the dampness, which she described as uncanny.

Although Posthuman Habitats was never really meant to produce a solution for our growing environmental and food sustainability problems, its designer hopes that by bringing these issues literally to body level, it will at least get people thinking about them more seriously.