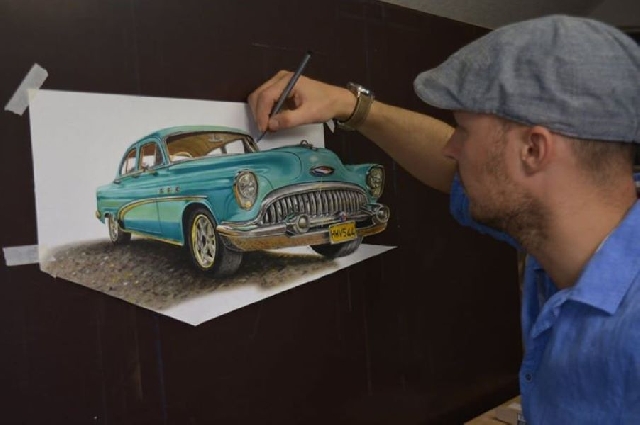 The German artist has become much more known for his mind-blowing optical illusions.

When it comes to ultra-realistic, hand-drawn or painted anamorphic illusions, you’d be hard-pressed to find someone better than German artist Stefan Pabst. Just take a look at some of his work and you’ll be rubbing your eyes in amazement.

Born in Russia, Stefan Pabst has been living in Germany since he was 15-year-old. In 2007, he started painting and drawing portraits, but quickly got bored with it and began looking for a way to somehow traverse the 2D border of a sheet of paper. As he continued to explore the limits of his talent, Pabst stumbled upon the art of anamorphic illusions, and he hasn’t looked back since. Although he continues to create commission portraits, the German artist has become much more known for his mind-blowing optical illusions.

Pabst’s artworks sometimes turn out so good that he often gets criticised for using computer software to alter the pictures he posts on social media. Luckily, he also uploads speed-drawing and speed-painting videos, as well as clips of himself rotating the artworks to demonstrate how the anamorphic effect works. Still, he admits that he himself is sometimes fooled by the realistic look of some of his works.

“After I did the spider painting, it made me feel a little queasy,” Pabst told BuzzFeed. “I knew it wasn’t real, my head kept telling me it was dangerous and disgusting.”

Asked about the message he wants to convey to his audience, Stefan Pabst said that he hopes to inspire people that they can do anything if they really put their mind to it.

The talented has big plans for the future as well, hoping to combine anamorphic art with his portraits in order to make his subjects seem like they are looking out from the paper.

If you’re interested in more amazing optical illusion, check out the face-painted illusions of Luca Luce and Romanie-Jade Tulloch, or the hand-drawn masterpieces of Marcello Barenghi.