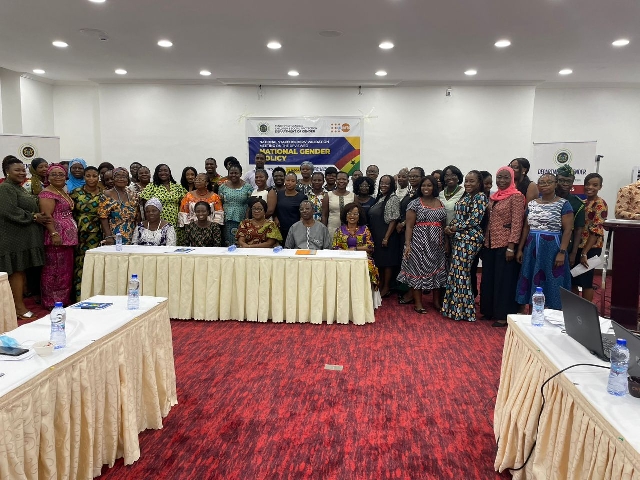 The Department of Gender of the Ministry of Gender, Children and Social Protection (MoGCSP), has held a national consultative meeting to solicit views towards the revision of the National Gender Policy.

The consultative meeting was sponsored by the United Nations Population Fund (UNFPA) and held on Wednesday, December 7, 2022, in Accra.

The meeting was also to review the strategic implementation plan of the policy.

The stakeholders at the said meeting included the Ministries of Gender, Interior, UNICEF, and the Regional Coordinating Councils from across the country and Civil Society Organizations (CSOs).

After the meeting, there would be regional and district consultative meetings, for qualitative and quantitative data to be gathered from citizens nationwide on national validation meeting is to finalize inputs from comprehensive stakeholder engagements for a revised National Gender Policy and its Strategic Implementation Plan for effective gender mainstreaming in Ghana.

The policy focuses on mainstreaming Gender Equality and Women’s Empowerment into Ghana’s Development Efforts at all tiers of Governance.

Speaking on the approach to the implementation of the policy, Minister-Designate for Gender, Children and Social Protection, Lariba Zuweira Abudu said there would be a budgetary allocation from parliament and the Ministry of Finance for the exercise.

‘Moreover, there would be partnerships with International Grant Agencies and monthly updates on the progress of the exercise would be shared with the public.

The Minister- Designate said there was room for improvement on the policy after five years of its implementation to enable it to reflect the current state of gender issues in the country and create more room for women and girls to appreciate their full potential.

To her, it was prudent that the Department worked with stakeholders to ensure a significant increase in gender equity, and equality to close the gender gap.

According to her, gender inequality placed females in disadvantaged situations, thereby curtailing their growth and development.

It had also compromised the optimal utilization of human capital in various countries, she said adding, therefore, that the Policy's vision of building a gender-just society in which all women and men enjoyed equality and equity and participated as equal partners in the development process of the country was bold, smart and compelling.

She explained that statistics from the Accra Regional Office of the DOVVSU, as of August 2020 revealed that 31.9 per cent of Ghanaian women had faced at least one form of domestic, physical, economic, psychological, social or sexual violence.

"It is, therefore, our hope that the review of this document and its strategic framework will meet the expected goals of our advocacy efforts for women and girls', combating abuses, and discriminatory practices and challenging the roles and stereotypes that affected inequalities and exclusion.”

Dr Hafisa Zakaria, the Chief Director, of MoGCSP, on her part, said the exercise would enable the stakeholders to have a common understanding of issues pertaining to mainstreaming gender and preventing pervasive discriminatory practices against women including stereotypes and women's participation in political spheres of the nation.

She said women and men were entitled to enjoy the same economic resources, political participation, leadership and decision-making platforms, and employment opportunities.