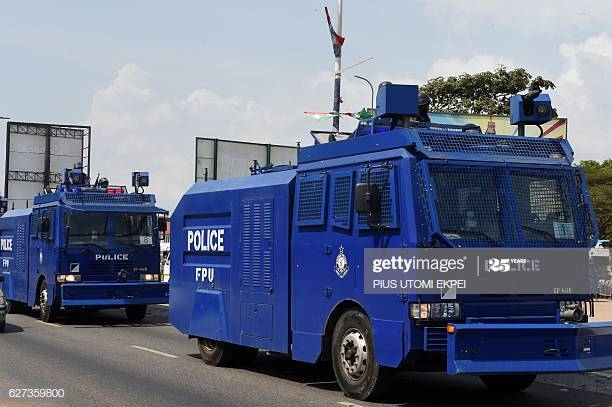 Police in Asankragwa, led by the Divisional Crime Officer Superintendent Henry Agbeve, have arrested nine persons, including two National Security personnel, for robbing miners near Atalla of their gold concentrate.

The Police, in a report, said the suspects were arrested on Saturday, 25 April 2020, on the Asankragwa – Wasa Dunkwa road aboard an unregistered black Toyota Land Cruiser Prado but one Kofi Asante, who allegedly led the gang, managed to escape.

A search of the vehicle revealed a vehicle number plate with registration number AS 6646 – 20, gold concentrates in five gallons, 15 mobile phones, various foreign currencies, and four bags in which there were two military uniforms.

Preliminary investigations revealed that the gang arrived at a mining site near Atalla, about two hours’ drive from Asankragwa, with some dressed in military fatigues and subjected some of the workers to beatings, handcuffed and tied them with ropes and abandoned them for death as well as robbed them of their gold concentrates.

After the act, the supposed soldiers folded the military uniforms into their respective bags and fled in their vehicle.

The workers managed to free themselves and ran away.

The police visited the scene and managed to retrieve the damaged handcuffs and the workers informed the law enforcers that the suspects came there to rob them of their gold concentrate.

The suspects are in custody while the vehicle and all other items have been retained.