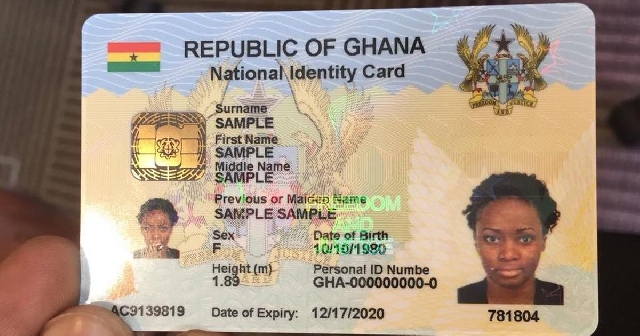 Four officials of the National Identification Authority (NIA) and one other person, have been arrested by the police for engaging in various registration offences and malpractices during the ongoing mass Ghana card registration exercise being conducted in the Ashanti Region.

The arrests, which occurred between 3rd and 6th January 2020, were the result of a collaboration between the NIA and some aggrieved citizens in the region, who provided the NIA with relevant incriminating evidence on the conduct of the suspects and also identified them to the police.

The arrested persons are:

5. Kwabena Dan – a resident of Nyinampong.

All the suspects have been granted police enquiry bail and will be assisting the police with investigations.

Meanwhile, the management of NIA, in a statement, said it is satisfied, following administrative procedures, that the conduct of its aforesaid registration officials is in breach of the relevant provisions of the Public Service Code of Conduct.

The NIA said it has further determined that the said conduct also constitutes an egregious violation of applicable internal rules and regulations governing the conduct of its registration officials.

The NIA has urged the general public to expose, with credible evidence, acts of suspected corruption in the Ghana card registration process across the country, particularly in the Ashanti Region where the exercise is currently underway.

The NIA admonished the public that:

2. No registration (form filling or biometric data capture) is permitted beyond 5 p.m.;

4. Any claim that an NIA registration centre has run out of registration materials such as Registration Form or Oath of Identity Form can only be false as several million forms have been printed and adequate supply-chain management arrangements made to ensure stock is never depleted before being replenished. Any claim that “forms are finished” is only a hoax designed to create artificial shortage to aid the enterprise of extorting monies from applicants.

5. No person is allowed to carry away from a registration centre a blank or completed Registration Form or Oath of Identity Form, unless the entire registration process is complete and the Ghana Card issued to the applicant or only the issuance of the card remains.

The NIA, however, said it is proud of the conduct of the majority of its staff who are law-abiding and performing their registration duties in a manner that is above reproach and has encouraged all such officials to maintain their high performance and to report their few colleagues whose conduct is creating pain and hardship for the citizenry, marring the registration exercise, and undermining public confidence and trust in the NIA and government.