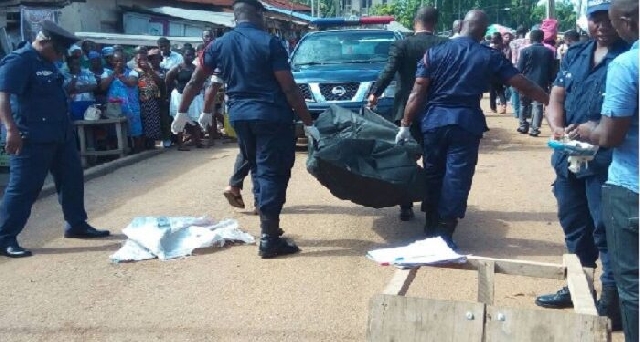 A 67-year-old woman Aba Yaa, has been found hanging in an uncompleted building at Nkusum near Mankessim in the Mfantseman Municipality of the Central Region.

The woman had disappeared on Saturday, 3 December 2022 only to be found dead in an uncompleted building in her house.

Daughter of the deceased, Esi, told Class FM’s Central Regional Correspondent Nana Tawiah that she woke up early in the morning to go jogging but did not see her mother before leaving.

According to her, she thought her mother had gone to visit a neighbour, so she also left to go jogging.

She, however, returned home to still meet her mother’s absence.

She searched the house and found her mother sitting on the bare floor, half naked, with a sponge tied around her neck, hanging on to a wood in the uncompleted building.

There are suspicions that the woman was killed by some unknown persons due to the way she was found seated on the bare floor.

Residents have expressed worry at the incident, as they say it is the first time something like that is happening in the community.

They appealed to the Police to provide them with security as they are living in fear.

Confirming the incident, Assemblyman for Mankessim New Nkusukum, Mohammed Ekow Arthur said he got a distress call informing him of the incident and followed up to the scene.

The Assemblyman stressed that he did not believe the deceased hanged herself as the scene did not look like it, but rather someone must have killed her, and made it look like a suicide.

He advised residents of the area to be vigilant and make it a habit of checking up on their neighbours often.

The body of the deceased has since been deposited at the Cape Coast Teaching Hospital Mortuary for autopsy and preservation.

The Mankessim Police have since launched investigations into the incident.