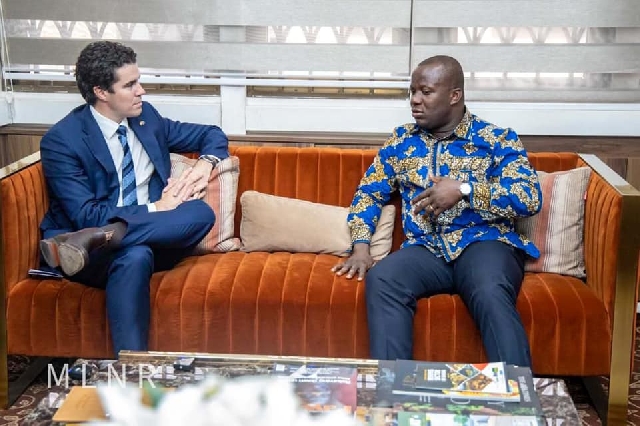 There exist strong bilateral relations between Ghana and Australia

The Minister for Lands and Natural Resources, Samuel A. Jinapor (MP) has advanced the need for further collaboration and cooperation between the government of Ghana and Australia in the area of mining and exploitation of natural resources for the benefits of the two countries.

According to the Minister, there exist strong bilateral relations between Ghana and Australia but the two countries could ramp up their relationship and improve the benefits they derive, particularly in the area of mining and resources management.

Mr Jinapor made the remarks when he received the Australian Assistant Foreign Minister, Tim Watts and the Australian High Commissioner to Ghana, Berenice Owen-Jones at his office on Wednesday, December 7, 2022.

Mr Jinapor gave the delegation a summarized overview of Ghana’s mining sector, highlighting the strides the industry has made so far under the current government.

He explained that notwithstanding the challenges of illegal mining, the government through some laudable initiatives as well as policies has recorded some noteworthy gains and is on course to position Ghana as the hub for all mining activities on the continent.

“The relationship between our two countries is very strong. Ghana and Australia have strong bilateral relations and we engage and relate between businesses and at the government level. In the mining sector, Australian mining giants continue to operate here in Ghana, which is indeed very welcoming. The President of the Republic is working to make Ghana the mining hub of Africa”, he stated.

The Minister said, most importantly, “we do all this within the context of respect for our environment. The President is determined that in the bid to exploit our mineral resources and build a robust mining industry, we should not destroy our environment so we are putting in measures to protect it”.

“I believe that out of this visit, we can ramp up the relationship between the two countries, particularly the Ministry of Lands and Natural Resources whose core mandate is to intelligently exploit the natural resources of the country with other institutions and agencies in Australia for us to learn and collaborate for the mutual benefits of our respective countries,” he said.

Mr Tim Watts, the Australian Assistant Foreign Minister outlined the various values shared between the two countries adding that there is a strong partnership between Ghana and Australia.

He noted that as members of the Commonwealth of Nations, Ghana and Australia believe in the tenets of the organisation and also hold them in high esteem democratic principles.

Mr Watts mentioned the presence of Australian mining companies as one avenue where the connection between the countries manifests.

He said that Australian mining companies have a reputation for mining in respect of the regulations of their country of operation and in an environmentally-friendly manner.