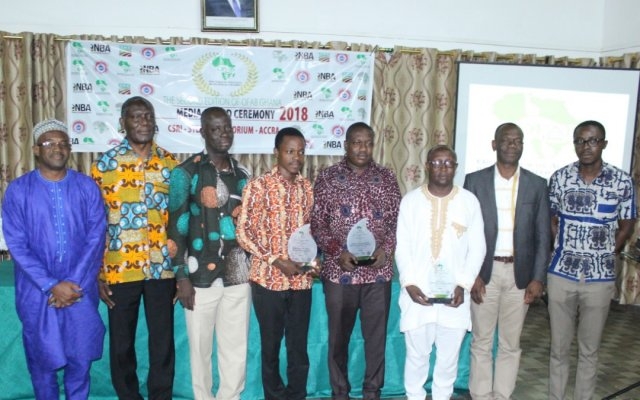 The organisers of the 2019 Open Forum for Agricultural Biotechnology (OFAB) Media Awards have disclosed their resolve to continually reward scientific accuracy in reporting biotech-related stories with originality and clarity of interpretation in order to foster a better public understanding of agricultural biotechnology to make an impact.

The awards, slated for 2 September 2019 in Accra, seeks to reward journalists, who have distinguished themselves in scientific reporting in Ghana.

According to the National President of OFAB, Dr Richard Ampadu-Ameyaw, the Ghanaian economy is science- and technology-driven, compelling players in the sector to whip up the interest of media practitioners to scale up efforts in science reportage.

In an interview with Class91.3FM’s Jerry Akornor after the launch of the awards in Accra on Friday, 16 August 2019, Dr Ampadu-Ameyaw, who is also a Senior Scientist at the Centre for Scientific and Industrial Research (CSIR), charged the media to intensify their advocacy on agricultural and scientific issues.

"The award seeks to reward all journalists who have done exemplary work in terms of reporting science, especially in this time that we're trying to lead the economy by science and technology. We'll want to see media people get into science reporting", he said.

The OFAB Media Awards, which started in July 2017, is organising its 3rd edition and has opened entries for eligible media professionals to compete for the covetous media award for the year 2019.

Several awards and prizes are up for grabs with the opportunity to represent Ghana at OMA Africa.

OFAB, the brainchild of the African Agricultural Technology Foundation (AATF), is a platform that provides an opportunity to enhance knowledge-sharing and awareness on agricultural biotechnology that will raise the understanding and appreciation of the technology and contribute to building an enabling environment for informed and timely decision making.

OFAB Ghana engages with various stakeholders during conferences, workshops, and stakeholder meetings, teaming up with journalists, to bridge the gap between scientists and policymakers as well as the public.

With agriculture, science and technology being an integral part of Ghana’s economy and development agenda, OFAB believes journalists playing outstanding roles in achieving Ghana's development goals in accordance with the Sustainable Development Goals (SDGs) must be acknowledged for their pivotal contributions.

In this regard, OFAB is determined in its avowed agenda to encourage journalists to cover more agriculture and biotechnology stories in bringing development to the front burner of national discourse.

The award aims at recognising exemplary journalism that stimulates best practices in the adoption of agricultural technologies, particularly agricultural biotechnology.

This year’s awards ceremony is in three categories for the Agricultural/Biotechnology journalist of the year (Print and Online, Radio and Television).

In consonance with the rules of engagement, journalists submitting their stories are required to include the following:

I. A brief synopsis (about 150 words) of the stories submitted (Max 3 stories for each category)

III. A brief 200-word piece explaining the motivation for each story submitted

V. A copy of national ID/Passport

VI. Evidence of Media Accreditation/Membership of a National Media Association.