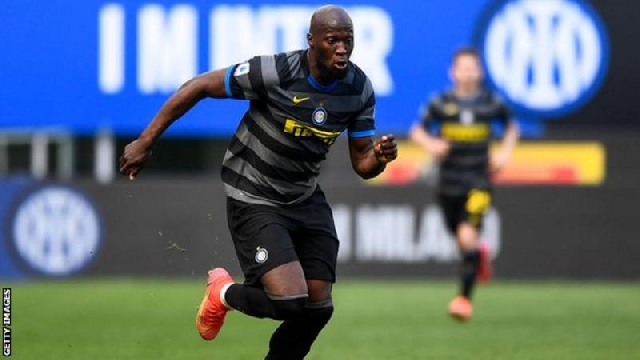 Romelu Lukaku has scored 27 goals for Inter Milan this season

Inter Milan have ended their 11-year wait for the Serie A title and former Manchester United striker Romelu Lukaku has been at the heart of their success.

When the Belgian made the £74m switch to the Nerazurri in August 2019, he had big boots to fill, replacing Mauro Icardi as Inter's main striker.

Although the Argentine's time at Inter was tainted by off-field controversy, on the pitch he was one of their most reliable performers, with 111 goals in 169 Serie A starts.

Lukaku left United with 42 goals in 96 games across two years, but his scoring tailed off, with 26% of his tally coming in the first two months of his Old Trafford career, and he received criticism for a perceived lack of workrate, a wayward touch and wasteful finishing.

But the 27-year-old has risen to the challenge at Inter and has even surpassed Icardi's scoring rate to help bridge the gap to the top and end Juventus' nine-season Serie A dominance.

Inter finished a substantial 21 points behind Juve in 2018-19. But the arrivals of Lukaku and head coach Antonio Conte enabled a title challenge last season, as they finished second, one point behind Juve, before going all the way this time around.

So what has changed for Lukaku in Milan?

A new-found chemistry with Martinez

At Everton and Manchester United, Lukaku would often be deployed as a lone striker.

It shows the development in his game that not only is he part of a 3-5-2 system that maximises his strengths, but his play is also now refined enough to extract the best from his strike partner, Lautaro Martinez.

The duo have a natural chemistry. When Martinez drops deep to create, Lukaku will run in-behind.

When Lukaku uses his hold-up play to pin defenders back, Martinez will make a run off him.

Both players can serve as the creator or goalscorer, which makes them a very difficult partnership to defend against.

In 64 starts together, they have assisted 18 goals for each other - while assisting or scoring an additional 87 goals between them.

Lukaku's hold-up play has always been a major facet of his game, but he has aligned this with increased creativity in the final third.

His assist for Martinez's first goal in February's Milan derby - which Inter won 3-0 - demonstrated how cultured his all-round game has become.

Lukaku made one of his familiar movements to the right-wing and outpaced Milan captain Alessio Romagnoli, then whipped in a brilliant cross for Martinez to head home.

No Serie A player has assisted more goals than Lukaku's 10 this season and his chances created, expected assists (creating a chance that would be expected to be scored) and distance carrying the ball are all at the highest level he has produced in the past four seasons.