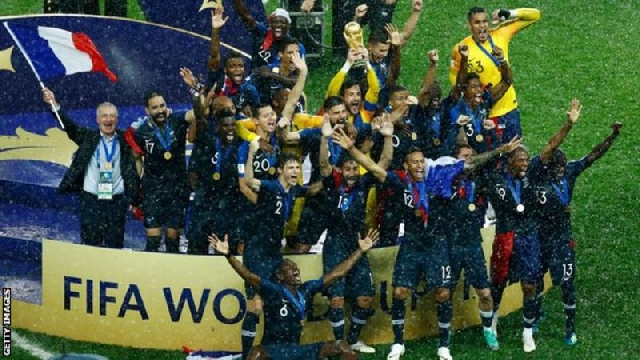 A majority of fans would support a men's World Cup every two years instead of four, according to a survey commissioned by world football governing body Fifa.

A biennial tournament is part of Fifa's plans for a revamped football calendar.

European governing body Uefa and Europe's major leagues have already declared their opposition to the plans.

But Fifa says the proposals have global support, particularly among younger fans in "developing markets".

It used polling company YouGov to commission a poll involving 23,000 people in 23 countries, across the organisation's six confederations.

Of those, 15,000 respondents "were identified as expressing an interest in football and the Fifa World Cup".

Fifa says the majority of those fans would like to see a more frequent men's World Cup and of those respondents, a majority preferred a biennial competition.

"There are considerable differences between the so-called traditional markets and the developing football markets; and younger generations in all regions are more open and interested in change than older generations," Fifa said in a statement.

The governing body said it would publish full details of the survey and added that an expanded survey involving 100,000 people in more than 100 countries is under way.

Fifa launched a feasibility study into a biennial men's and women's World Cup following a proposal from the Saudi Arabian football federation in May.

The consultation process is being led by former Arsenal boss Arsene Wenger, who is Fifa's head of global football development.

He believes the current four-year cycle is outdated and that a biennial World Cup with shorter qualification stages would actually reduce the amount of matches players are expected to play.

He also thinks it would offer better opportunities to players from smaller nations, and generate more revenues that could be invested globally in the game.

The Premier League, EFL and SPFL have confirmed their opposition as part of their membership of the European League and World League forums, which have issued statements saying they "firmly and unanimously opposed" to the plans.

Uefa and South American confederation Conmebol have both rejected the idea, while world players' union Fifpro has voiced concerns about player workloads and warned the proposals will not have any legitimacy without the support of its members.

However, the Asian Football Confederation said it welcomes the consultation process while the North, Central America and Caribbean football confederation Concacaf says it is studying the plans.

The men's World Cup has been held every four years since the inaugural tournament in 1930, except in 1942 and 1946 because of World War Two.

The women's tournament has also been every four years since it began in 1991.