We’re down but not out – Bawumia to Black Stars; urges Ghanaians to support the team 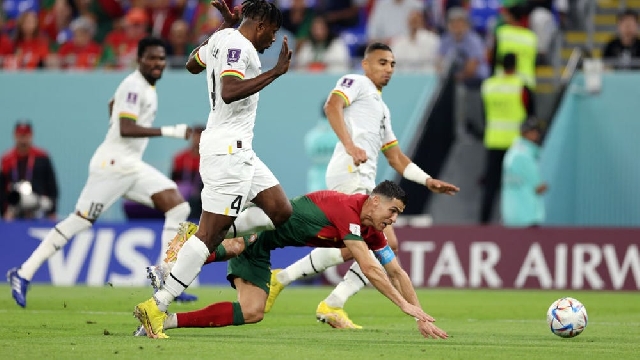 Black Stars players snatch the ball away from Ronaldo

Vice President Dr Mahamudu Bawumia has encouraged Ghanaians not to despair but continue to have confidence in the Black Stars despite their opening World Cup defeat to Portugal on Thursday.

Ghana lost 2-3 to Portugal despite a spirited performance from the team.

Dr Bawumia in a Facebook post noted that “while we are all downhearted by the unfortunate loss by the Black Stars to Portugal, we must appreciate that they put up a spirited performance and acquitted themselves well.”

“We may be down, but we are certainly not out and we should not despair,” he encouraged.

He urged Ghanaians remain united behind the Black Stars and support them strongly in the remaining group matches.

Similarly, President Akufo-Addo also said the players put up a good performance adding that he was proud of them.

Ghana will play South Korea in their second game on Monday 28 November and Uruguay on December 2.