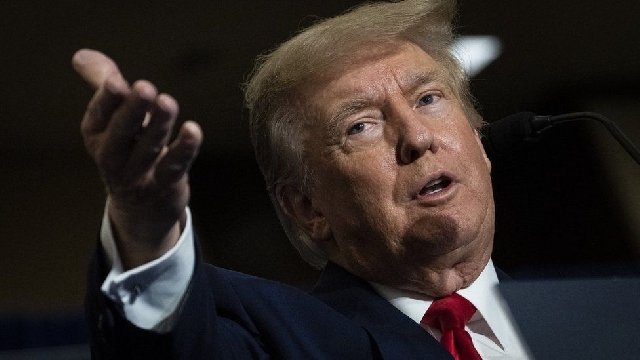 Ex-US President Donald Trump has said his Florida home was raided by the FBI, and that agents broke open a safe.

Mr Trump said in a statement that Mar-a-Lago in Palm Beach was "occupied by a large group of FBI agents".

Monday's search was reportedly connected to an investigation into Mr Trump's handling of official papers.

"These are dark times for our nation," Mr Trump's statement said. "Nothing like this has ever happened to a President of the United States before."

The FBI (Federal Bureau of Investigation) and the justice department have not commented on the reported search.

American presidents are required by the Presidential Records Act (PRA) to transfer all of their letters, work documents and emails to the National Archives (NA).

There are also other federal laws regarding the handling of classified documents.

In February, the National Archives said it had retrieved 15 boxes of papers from Mar-a-Lago, which Mr Trump should have turned over when he left the White House.

Mr Trump's lawyer, Christina Bobb, told NBC News that some papers had been seized during the search.

The dramatic escalation of law enforcement scrutiny of Mr Trump comes as the Republican prepares for a possible another presidential run in 2024.

News of the search has mobilised some of Donald Trump's supporters. A group of fans gathered outside Mar-a-Lago to wave flags and express their anger.

Mr Trump said he had co-operated with all relevant government agencies and so the "unannounced raid on my home was not necessary or appropriate".

He said it amounted to "prosecutorial misconduct" and "the weaponisation of the justice system" to prevent him from running for the White House again.

"Such an assault could only take place in broken, Third-World countries," he said. "Sadly, America has now become one of those countries, corrupt at a level not seen before.

"They even broke into my safe!"

According to CBS News, the BBC's US partner, Mr Trump was in Trump Tower in New York City at the time of the reported raid.

Eric Trump, the president's second-oldest son, told Fox News that the FBI's execution of the search warrant on Mr Trump's Mar-a-Lago estate was related to an investigation into the handling of National Archives records.

In February, the NA asked the justice department to investigate Mr Trump for his handling of official papers.

NA officials say the former president illegally ripped up many documents. Some of them had to be taped back together, they said.

Mr Trump at the time rejected reports that he had mishandled official records as "fake news".

A senior Trump adviser in Palm Beach told CBS the new search by federal agents on Mar-a-Lago was about the presidential records.

"This is about the PRA," said the Trump source, who only agreed to speak on condition of anonymity.

"When have you ever heard about a raid because of PRA?"

The source added: "They [the FBI] just left and they left with very little."

A federal search warrant must be signed by a judge. Though such a warrant does not suggest that criminal charges are expected, law enforcement agencies must first demonstrate they have probable evidence of illegality.

An unnamed law enforcement official told CBS that the Secret Service was notified shortly before the warrant was served around 10:00 local time on Monday (14:00 GMT) and that agents protecting Mr Trump helped the FBI investigators.

Several boxes were taken away, the source said, adding that no doors were kicked down and that the raid had concluded by the late afternoon.

In a forthcoming book, Confidence Man, New York Times journalist Maggie Haberman reports that staff at the White House residency sometimes found wads of paper clogging a toilet and that they believed Mr Trump was the flusher.

Ms Haberman has posted photos that she says show paper in a toilet bowl at the White House.

A senior White House official has told CBS that President Joe Biden's administration was given no notice of the FBI search.

"No advance knowledge," said the senior official, who was not authorised to speak publicly about the matter. "Some learned from old media, some from social media."

The White House has said it is limiting its interactions with top justice department officials to avoid any hint of political pressure or impropriety.

Mr Biden pledged during his White House campaign to stay out of justice department affairs. The Democratic president and his family are also waiting to see whether federal prosecutors will indict his son, Hunter Biden, on tax evasion or other federal charges.