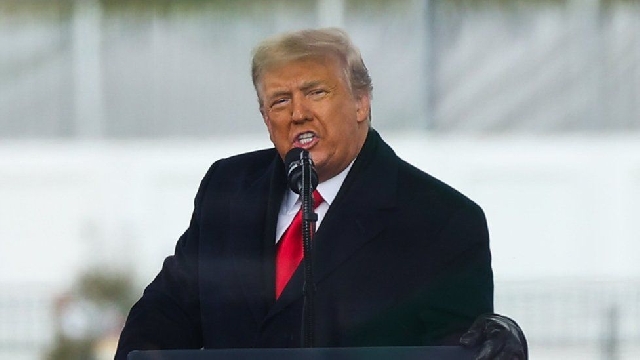 The 6 January committee did not conclude its ninth and possibly final public hearing by referring Donald Trump to the US justice department for criminal conduct - a move many, including some members of the panel, had urged.

Instead, it voted unanimously to subpoena the president to testify before the committee.

It was, effectively, substituting one symbolic action for another.

The decision of whether to indict the president for crimes relating to the 6 January 2021 attack on the US Capitol rests with the justice department, not Congress. And the committee's formal subpoena of the former president, while historic, is almost certain to be ignored by Mr Trump.

While the committee could vote to hold the former president in contempt of Congress, the clock is ticking towards next month's midterm elections and what could be a Republican takeover of the House of Representatives in January, when the committee would be unceremoniously shuttered.

Still, the vote to call Mr Trump to offer his defence made for a dramatic flourish at the end of what was another stinging round of accusations directed at the former president - one that included some never-before-seen footage from the Capitol attack and recently acquired documentary evidence.

The 6 January committee has laid responsibility for the attack at Donald Trump's feet, but one of the challenges it has faced has been tying the former president directly to the violence. Investigators have said Mr Trump created an atmosphere that led to violence and that he was aware that trouble was possible, but they have yet to directly link Mr Trump to those who attacked the Capitol.

In her presentation on Thursday, congresswoman Zoe Lofgren suggested that longtime Trump confidante Roger Stone was that missing link. Mr Stone was in contact with members of the right-wing militant groups Proud Boys and the Oath Keepers - individuals who have been charged with seditious conspiracy by the justice department for their involvement in the Capitol attacks.

Ms Lofgren showed photographs of Mr Stone with leaders of the Oath Keepers the day before the Capitol attack. She also noted that Mr Stone was in touch with Mr Trump in late December and that the president wanted to talk with Mr Stone in the days leading up to 6 January.

Still, however, the committee has been unable to fully document interactions between Mr Stone and the president.

"We don't yet have all the relevant records of Roger Stone's communications," Ms Lofgren said.

If Mr Stone is the missing link, it is one that remains in the shadows.

Congressman Adam Schiff was tasked with presenting new evidence that the select committee had received from the Secret Service detailing their agents' communications during and before the Capitol attack.

He read one email from an anonymous tipster warning that groups were planning violence. In texts and emails on 6 January, the agents noted the large crowds lingering outside Mr Trump's morning "Stop the Steal" rally and speculated that it could be because they were armed.

Other reports, of sightings of handguns, assault rifles, riot shields and pepper spray, back this up.

All this, the congressman continued, was evidence that the White House - and its security teams - knew that violence was not only possible but probable as the crowd moved up Pennsylvania Avenue to the Capitol. He even suggested agents may have lied to congressional investigators.

"Despite this, certain White House and Secret Service witnesses previously testified that they had received no intelligence about violence that could potentially threaten any of the protectees on January 6, including the vice-president," Mr Schiff said. "Evidence strongly suggests that this testimony is not credible."

Congressman Pete Aguilar later added that the committee is reviewing testimony and will consider whether some witnesses were pressured not to tell the full story about what the White House and the Secret Service knew in advance.

After the hearing concluded, congressman Jamie Raskin of Maryland told reporters outside the room that he thought Mr Trump ought to take the committee up on its offer to testify.

"I would consider it a great honour and a privilege to testify if somebody accused me of trying to overthrow a presidential election and subvert the government of the United States," he said.

Wry comments aside, the committee offered a concise summary of what it views as its case against the former president - that he had the means, motive and opportunity to attempt to undermine the peaceful transition of power to the presidential candidate who defeated him at the ballot box.

It was a case, committee chairman Bennie Thompson said, that was made not by the testimony of Democrats or Mr Trump's political opponents, but by the former president's own loyal staff members, senior advisers, executive appointees and Republican state politicians.

Republican congressman Adam Kinzinger reviewed the evidence the committee acquired indicating that the president knew he had been defeated but refused to cede power.

He presented testimony by former White House aide Cassidy Hutchison, who said she witnessed Mr Trump telling White House Chief of Staff Mark Meadows: "I don't want people to know we lost, Mark. This is embarrassing. Figure it out."

Congresswoman Elaine Luria of Virginia asserted that Mr Trump knew that the claims he was making about election fraud were false, but he persisted anyway.

Mr Raskin spoke of the president's actions on 6 January and how he watched the violence unfold, was urged to intervene by friends, advisers and members of Congress, and refused.

In one powerful segment, he played new video footage of House Speaker Nancy Pelosi and then-Senate Majority leader Chuck Schumer pleading with the secretary of defence to send troops to quell the violence at the Capitol.

At the end of the hearing, Mr Thompson again addressed the room and announced the decision to subpoena the former president.

"We want to hear from him," he said. "This is a question about accountability to the American people. He must be accountable. He is required to answer for his actions."

Within the hour, the former president had issued his reply, accusing the committee of being a "bust" and promising that his endorsed candidates would win in next month's elections.