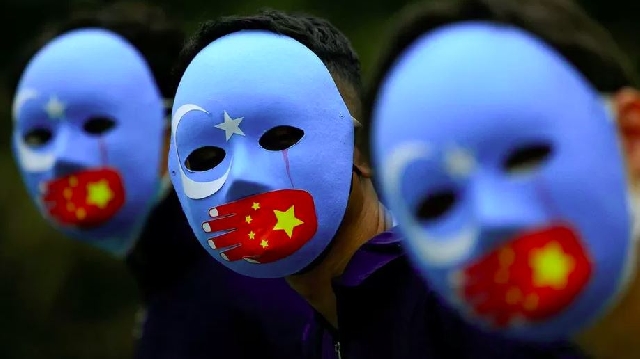 The long-standing accusations have prompted protests around the world, including this one in Jakarta in January

The UN has accused China of "serious human rights violations" in a long-awaited report into allegations of abuse in Xinjiang province.

China had urged the UN not to release the report - with Beijing calling it a "farce" arranged by Western powers.

The report assesses claims of abuse against Uyghur Muslims and other ethnic minorities, which China denies.

But investigators said they found "credible evidence" of torture possibly amounting to "crimes against humanity".

The report was released on Michelle Bachelet's final day on the job after four years as the UN's high commissioner for human rights.

Accusations of abuse against the Uyghurs have dominated her term.

Her team's report accused China of using vague national security laws to clamp down on the rights of minorities and establishing "systems of arbitrary detention".

It said prisoners had been subjected to "patterns of ill-treatment" which included "incidents of sexual and gender-based violence".

The UN recommended that China immediately takes steps to release "all individuals arbitrarily deprived of their liberty" and suggested that some of Beijing's actions could amount to the "commission of international crimes, including crimes against humanity".

While the UN said it could not be sure how many people have been held by the government, human rights groups estimate that more than a million people have been detained at camps in the Xinjiang region, in north-west China.

The World Uyghur Congress welcomed the report and urged a swift international response.

There are about 12 million Uyghurs, mostly Muslim, living in Xinjiang. The UN said non-Muslim members may have also been affected by the issues in the report.

The US and lawmakers in several other countries have previously denounced China's actions in Xinjiang as a genocide, but the UN stopped short of making the accusation.

Beijing - which saw the report in advance - denies allegations of abuse and argued that the camps are a tool to fight terrorism.

China has always insisted that Uyghur militants are waging a violent campaign for an independent state, but it is accused of exaggerating the threat in order to justify the repression of the Uyghurs.

Its delegation to the UN human rights council in Geneva on Thursday rejected the findings of the report, which it said "smeared and slandered China" and interfered in the country's internal affairs.

"This so-called 'assessment' is a politicised document that ignores the facts, and fully exposes the intention of the US, Western countries and anti-China forces to use human rights as a political tool," it said in a lengthy statement.