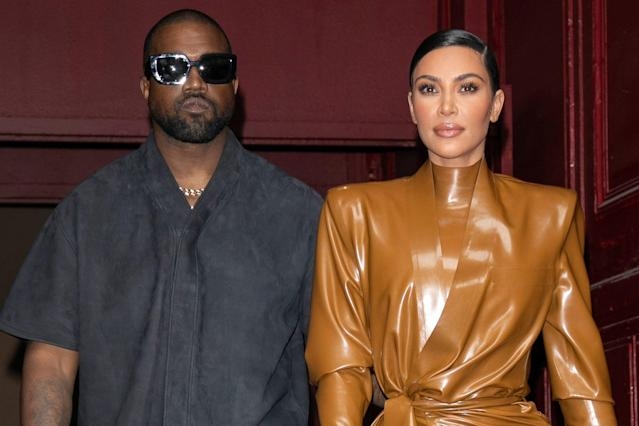 Kim Kardashian made sure to honor Kanye West on Father's Day despite filing for divorce earlier this year.

In her tribute on Sunday, the Keeping Up with the Kardashians star, 40, posted some throwbacks of the dads in her life, including Kanye, 44, with whom she shares four kids: daughters North, 8, and Chicago, 3, plus sons Saint, 5, and Psalm, 2.

"Happy Father's Day to all the amazing dads in our lives! Love you unconditionally!!!" Kim captioned the post, which also included photos of her late father Robert Kardashian, her brother Rob, Caitlyn Jenner, Scott Disick, Tristan Thompson, and Travis Scott.

Kris Jenner included the same group of dads in her own Father's Day post. "Happy Father's Day to all of the incredible fathers in our lives!!" she wrote. "Thank you for the unconditional love, the guidance, the support and the lessons you give to our families. To all the fathers, step fathers, fathers to be and father figures out there, we celebrate you today!! Enjoy your day!"

Kim and Kanye began dating in 2012 and tied the knot in 2014. Following a challenging period in their relationship last year, Kim filed for divorce from the rapper in February after six years of marriage.

Kanye has since been romantically linked with supermodel Irina Shayk, 35, after the two were spotted strolling alongside each other in France.

"Kanye is doing well. He had a great trip to France with Irina. They will date long distance," an insider previously told PEOPLE. "Kanye will continue to be L.A.-based. He has no plans to move to N.Y.C. His kids live in L.A. He is very focused on business in L.A. too. He likes spending time with Irina though and plans to see her soon again."

During a conversation WSJ Magazine's The One in April, Kim's mother Kris, 65, opened up about the split, saying it's important to always put the kids' best interests first.

"I think the most important thing I learned through my experience, both of my experiences, is that the kids come first," said Jenner, who shared four kids with her late first husband Robert Kardashian (daughters Kourtney, Kim and Khloé and son Rob) and two children with ex Caitlyn Jenner (daughters Kendall and Kylie).

Jenner added that things can "get really silly" in divorce, but it's important to prioritize the kids instead of focusing on "unnecessary" factors.