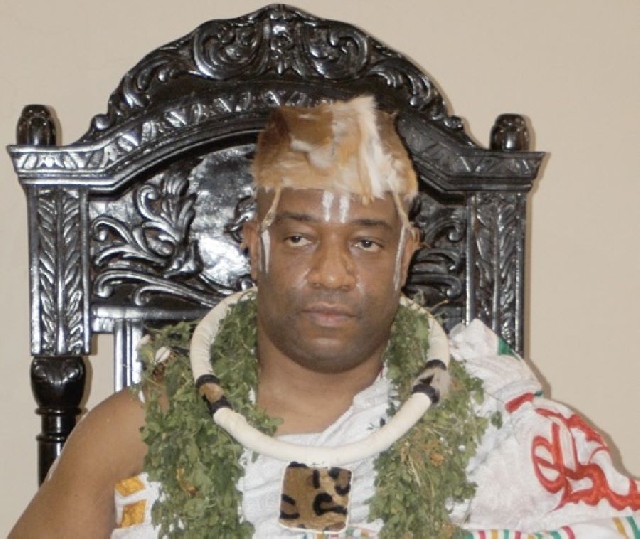 A new Ga Mantse has been inducted under tight police protection as the President of the Ga Traditional Council.

King Tackie Teiko Tsuru II, known in private life as Dr Kelvin Nii Tackie, was inducted last Saturday at the Ga Mantse Palace in the presence of some major chiefs under the paramountcy.

It was graced by the Otublohun Mantse, Nii Dodoo Nsaki, who until the event was the Acting President of the GTC; the Dzaasetse of the Ga Stool and Principal Kingmaker, Nii Dr Tettei Kwei and the Sempe Mantse, Nii Adote Otintor.

At the ultimate moment of the ceremony, the Dzaasetse stepped out to King Teiko Tsuru, lifted his hands three times and pronounced him as the legitimate occupant of the presidency of the Ga Traditional Council, drawing spontaneous cheers from the gathering.

While it lacked the presence of the youth and women’s groups, it did not lack the electrifying atmosphere, as traditional music and dance gripped the impressive crowd in attendance.

In his induction speech, King Teiko Tsuru II promised to lead the Ga State to the path of restoration, with truth and trust as his guiding principles, to bring unity to the state and among the people.

He emphasised that what was required for the Ga State to occupy its rightful place in the country and contribute significantly to national development was for all of its people to be united and discard selfishness and other destructive tendencies.

"Let us learn from the proverbial broom; a broomstick can be broken easily and it cannot even sweep; but if you have a bunch of them, it is hard to break them and they sweep better," he said.

He assured the people of Ga origin that his ultimate goal would be to offer leadership that would bring hope to the youth and rekindle the lost glory of the state.

“I did not come to rule over you; I came to serve you. I have to bring unity among us so that glory will return to the Ga State. We want prosperity and peace. The Ga State will never be the same," he said.

King Teiko Tsuru II said the promotion of education and the development of the Ga language would be a top priority for him during his reign as the Ga Mantse.

Touching on the COVID-19 that has infected over 4,000 people in Ghana and more than four million across the world, he urged all persons to adhere strictly to the safety protocols put out by the health authorities to contain the pandemic.

In particular, he asked members of the public to observe physical distancing protocols and also religiously wear their nose masks to prevent the spread of the virus.

"Because I don’t want the coronavirus to affect us, let us all adhere to the safety precautions given by the government. Let us always wear nose masks and wash our hands often,” he said.

For his part, Nii Dr Tetteh Kwei described the induction of King Teiko Tsuru to the presidency of the Ga Traditional Council as a major boost to the agenda to build peace and unity in the Ga State.

Touching on nation-building issues, the Dzaasetse said it was worrying that greed, selfishness and corruption had eroded the moral fibre of the country and affected national development.

He said the time had come for all ethnic groupings to rally round the national flag to weed out such tendencies.

Speaking on behalf of Nii Dodoo Nsaki, the Sempe Mantse, Nii Adote Otintor, thanked all the other chiefs for the support extended to him when he held the fort as the Acting President of the Ga Traditional Council.

He said the common enemy the Ga State should be fighting was underdevelopment.