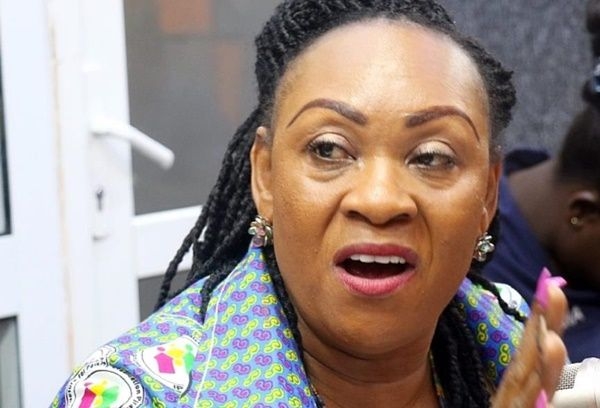 The Member of Parliament for Awutu Senya East, Mavis Hawa Koomson, has been invited by the Police for questioning.

This follows her admission that she fired warning shots at the Step to Christ centre at Kasoa in the ongoing mass voter registration exercise on Monday, 20 July 2020.

The warning shot, as well as mayhem at the polling centre, led to an abrupt end to the registration exercise that day.

The MP for the Constituency said she took a gun to the centre for personal protection in her attempt to stop the parliamentary candidate of the National Democratic Congress (NDC), Phyllis Naa Koryoo, from busing aliens to the area to register.

Classfmonline.com understands that Ms Koomson was interrogated by the Central Regional Command.

Several groups including the Christian Council have called for the termination of the appointment of the MP for her action.

The Ghana Pentecostal and Charismatic Council (GPCC) for example says the lawmaker is “no longer tenable” to hold office.

The GPCC also wants President Akufo-Addo to dismiss the minister if she fails to resign.

The GPCC in a statement signed by its President, Rev Prof Paul Frimpong-Manso, said it has followed the incident with great concern and “more worrying is the involvement of the Member of Parliament for the area”.

The GPCC called on “the Ghana Police Service not to relent in their efforts in bringing all perpetrators of the shooting incident, including the Minister to book by ensuring that justice and fair play is manifestly seen to be done in this matter.”

The Council rehashed that: “The Ghana Police Service has the capacity and is capable of dealing with crimes of this nature without fear or favour and we wish to encourage them to rise up to this challenge in dealing with this and the earlier one reported at Banda Ahenkro in the Bono East Region no matter whose ox is gored so as to assure us that we can trust them to deal with all forms of violence ahead of the 2020 general election."

The GPCC is also of the view that the “Minister of state is no longer tenable and she must resign or be fired by the President without prejudice to any criminal actions that may be taken against her by the Police” and called on President Nana Addo Dankwa Akufo-Addo “to take immediate action on this matter to safeguard the peace and security of this nation and to assure all Ghanaians that we can trust him to keep this nation together in unity ahead of the General Elections in December.”

The GPCC also urged “Ghanaians, especially aggrieved individuals and parties at every stage of the electoral process, to resort to the time tested electoral laws and conflict resolution mechanisms and institutions to resolve” their grievances rather than violence.

It reminded citizens that: “It pays to use non-violent means to resolve our differences than the violent approaches, which could deprive us of our liberties, relations and even our lives."

GPCC urged the youth to channel their energies, talents and skills into very productive endeavours and refuse to be used by unpatriotic politicians for their greedy parochial interests saying “today and the future belongs to you so jealously guard it!”

The Council further reminded Ghanaians that “we have only one Ghana to live in with nowhere else to go in the event of any escalated violence, though it is an open secret that the politicians we are willing to die for have their passports and that of their families ready to fly out of this country should violence erupt”.

“Let’s be prudent and act responsibly to maintain the peace and security of Ghana for the future of our children and generations yet unborn.”

Speaking in his personal capacity rather than for the National Peace Council, which he chairs, Prof Asante described the incident as “very very very worrying”.

“I saw this very late last night before I slept and really, I was disturbed about the whole thing”, he told Benjamin Akakpo in an interview on Class91.3FM’s Executive Breakfast Show on Tuesday, 21 July 2020.

“Why? For the simple reason that we have an honourable minister, an honourable member of parliament also, and I believe that she’s also the NPP’s parliamentary candidate for Awutu Senya East Constituency. We would expect that such honourable people would provide leadership, no matter the provocation”, he explained.

“And, for her to have said that she felt threatened, so, she pulled a gun and fired it and created chaos in that place; what if, in pulling the gun, others, whoever the detractors may be, even if they were around, ... also pulled a gun? What would have happened?” he asked.

Prof Asante wondered if “pulling a gun” was the “only option” the minister and MP had under the circumstances.

“Even if her bodyguard was not around, couldn’t she have gone to the police station to inform the police about what was happening? As far as I’m concerned, it cannot be justified in any sense”, he said.

“She should do the honourable thing, and for me, resign”, Prof Asante demanded.

Apart from that, he said the “police must also investigate the matter and let the law take its course for that matter, especially, the context within which this was done – in a situation where tension is rising and we’re doing all we can, people from different angles are doing all they can to ensure that there would be peace and tranquillity in what we are doing; we will not expect our leaders, honourable people to do things of this nature”.

“If I’m an honourable person and I’ve done a thing of this nature, then I need to sit back and consider what I have to do. As for her being a minister, can she still maintain that dignity of an office? This is the thing”.

Beyond asking for her resignation and the police taking her on, Prof Asante said Parliament must also sanction the MP for her “dishonourable” action.

“Parliament must also have a say on such matters. Parliament cannot sit down and think that parliamentarians can do whatever they like and there will be no sanctions whatsoever. I would think that parliament, the executives, the speakers and all the leadership of parliament, will have something to say to this person because she brings the name of parliament into disrepute by her action. I mean, so, in any panicky situation, you pull a gun and shoot it? If an ordinary citizen does that, what is going to happen?

But Chairman of the governing New Patriotic Party (NPP), Mr Freddie Blay said it is “pointless” and “needless” to call for the lawmaker who is also the Minister for Special Initiative’s resignation.

A statement issued by the NPP National Chairman said despite the Awutu Senya East MP’s explanation about the circumstances that led to her conduct, “it is most worrying to see different groups expected to be more objective in their submissions, rather fall for the propaganda and misrepresentation of the opposition NDC in relations to the matter.”

According to Mr Blay, “With the unfolding evidence and facts surrounding the incident, it is clear that her actions were in self-defence to the unwarranted attacks on her and her team by masked motorists invited by the NDC to disrupt the EC registration process in her constituency”.

“Arguably, Mrs Hawa Koomson is one of the calmest female representatives of the NPP in Parliament and there is no evidence of any sort that can suggest her to be a violent individual, even in the face of extreme provocation. Unfortunately, the NDC’s ploy to stage confusion at registration centres across the country in their quest to discredit the electoral processes and create disaffection for the NPP seems to be gaining momentum. However, the NPP has an obligation to its members and admirers, to ensure it protects the hard-earned democratic reputation of the party.”

Mr Blay continued: “It would have been expected that those individuals and institutions who have found their voices after this unfortunate incident, even to the extent of calling for the resignation and/or dismissal of Mrs Hawa Koomson, undertook a more rational assessment of the facts before unfairly ostracising her and calling her names”.

“They have failed to evaluate the extent of fear and trauma this lady, mother and leader had experienced following the siege on her by sufficiently outnumbered armed hooligans hired by the NDC to disrupt the EC registration process”, the statement said.

“Besides preventing the Member of Parliament from witnessing the process in her constituency, evidential attacks on her convoy clearly demonstrate premeditation of events by the opposition NDC to humiliate, intimidate and molest her”, the NPP argued.

The statement further called “on the good people of Ghana to exercise restraint in their utterances and conduct with respect to this matter.”

It further cautioned “the CSOs, journalists and the army of security experts commenting on” the issue to “resist the temptation of emotional outbursts that are likely to fuel the violent desires of the opposition NDC, creating more indiscipline among their followers during the EC registration process and subsequently, the general elections. It is most regrettable to find highly-placed individuals resorting to name-calling and equally falling for the propaganda scheme of the opposition NDC to make light the commitment” of President Nana Addo Dankwa Akufo Addo in fighting against vigilantism and political violence in Ghana.

The NPP National Chairman further stated: “The pointless calls on the President to terminate the appointment of Hon Hawa Koomson is absolutely needless and must be totally disregarded. Let the good people of Ghana see such enthusiasm channelled into productive discussions aimed at addressing the fundamental concerns of recklessness and provocations of the NDC during this registration process.”

The statement further called on “the party’s leadership at the regional and constituency levels to continue exercising restraint while remaining vigilant in foiling attempts by the opposition NDC to indulge in all forms of illegalities as far as the EC’s new voter registration process is concerned.”

It also urged “the security agencies stationed at polling stations to remain forthright in ensuring that petitioners follow due process in challenging suspected unqualified individuals desirous of registering for the new voters’ ID.”

Mr Blay also encouraged “the Ghanaian middle-class society and professionals to take some time off their busy schedules and go out in their numbers to participate in the new voter registration process, observing all the COVID-19 protocols.

‘Let us not stand aloof and uninvolved, but prepare to cast our votes and support the good economic policies of the Nana Akufo Addo-led administration that inures to the benefit of us all. We must not make us lose faith in the prospects of our chosen democratic path."

It added that: “The NPP remains open for the exploration of direct talks with the opposition NDC and other political parties on issues of common interest and concern, moving away from the normal practice of frequently engaging an arbiter in mediating affairs of political parties.”