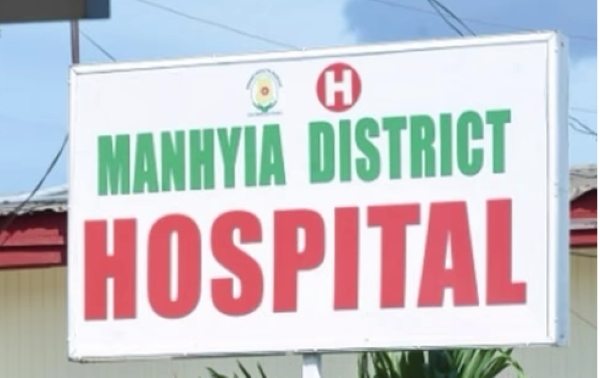 The District Chairperson for the Ghana Registered Nurses and Midwifeves Association Joseph Obeng Tuffour, was at the hospital to ensure all Nurses complied with the decision to strike

The strike action by the Nurses, has therefore left scores of patients stranded at the hospital.

Some of the patients pleaded with the Nurses to rescind their decision and come back to work.

A female patient said: “This should not be a reason for sacking someone from their job. Everyone makes mistakes, they must settle this amicably. I plead with the nurses, let’s let go, we all have kids so let it go so that the work can continue.

“The man did not do well, even an adult can make mistakes at work, but we won’t go and bring their mother or father, so we plead with the nurses, to let go and come back to work. They should forgive and come and attend to patients.”

A male patient also appealed “to the nurses to come back, the man has acknowledged he did not speak well, please forgive and come and attend to patients, we plead with you.”

Meanwhile the District Chairperson for the Ghana Registered Nurses and Midwifeves Association Joseph Obeng Tuffour, was at the hospital to ensure all Nurses complied with the decision to strike.

He described the utterances of the NSS director as unfit for public office.

“That is all that we’re pleading for, we’re just asking the government that he should listen to our plea.

“Because this is a person who occupies such a high position and then made certain comments that are unfortunate so for our people to work under this man, it is something that we think will not be helpful.”

He noted that they do not want Mr Opoku-Mensah relieved of his duties, only to be reassigned to anything Nursing and Midwifery-related again.

“We don’t want him anywhere near the nursing and midwifery profession so I think they can just place him somewhere else, that what we’re asking, he doesn’t even deserve to occupy any public office because of his utterances. They’re very unfortunate.”

For failing to sack the Ashanti Regional Director of the NSS, nurses at the Manhyia government Hospital  have begun a sit-down strike.

The Ghana Registered Nurses and Midwives Association (GRNMA) spearheading the strike said it will be escalated on 6 December where all nurses in the region will remain at home if the NSS regional Director, is still at post.

The Association in a statement further said there will be a nationwide strike of nurses by Friday, 9 November 2022, if their demand is not met.

The GRNMA said Mr Opoku-Mensah had no right to enter the hospital to abuse a nurse.

“I do apologise for any mishap and assure all, there shall not be a repetition of such.