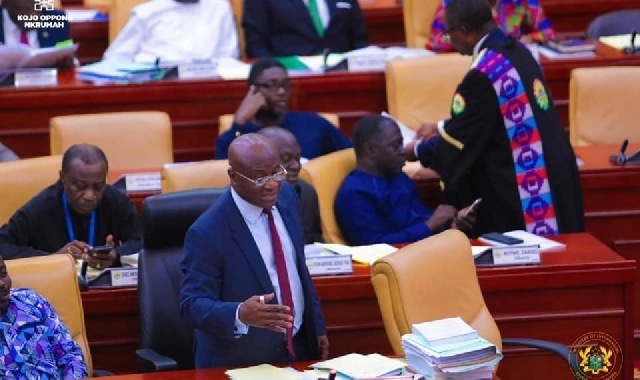 The 98 New Patriotic Party (NPP) MPs who intended to boycott Finance Minister Ken Ofori-Atta's budget, have made another U-turn.

The majority caucus has also resolved to support Mr Ofori-Atta in the passage of the 2023 budget.

The majority side came to this conclusion after an intervention by the leadership and Council of Elders of the NPP on Tuesday night.

Some 98 NPP MPs had insisted President Nana Akufo-Addo sack his cousin for messing up the economy or they would have nothing to do with him as far as government business on the floor of parliament is concerned.

However, after a crunch meeting with the party’s leadership and council of elders, the party released a statement dated 22 November 2022, jointly signed by Majority Chief Whip Annoh-Dompreh, and NPP General Secretary Justin Kodua Frimpong, saying: "It has been agreed by all to refocus and recline to the earlier position requested by President Akufo-Addo.”

The statement added that it was agreed that the 98 MPs “demand be stood down until the conclusion of the round of negotiations with the International Monetary Fund (IMF) which would feed into the 2023 budget”.

Below are details of the statement: 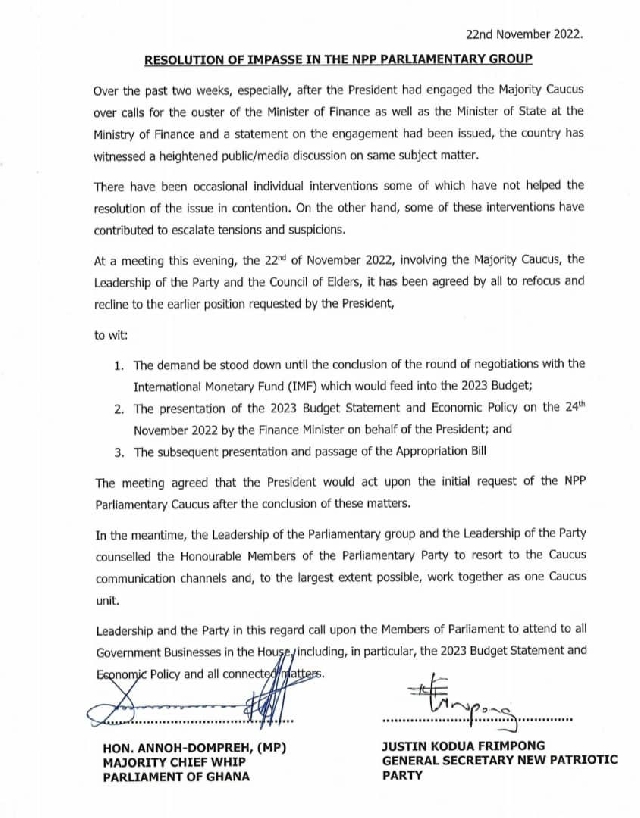 RESOLUTION OF IMPASSE IN THE NPP PARLIAMENTARY GROUP

Over the past two weeks, especially, after the President had engaged the Majority Caucus over calls for the ouster of the Minister of Finance as well as the Minister of State at the Ministry of Finance and a statement on the engagement had been issued, the country has witnessed a heightened public/media discussion on same subject matter.

There have been occasional individual interventions some of which have not helped the resolution of the issue in contention.

On the other hand, some of these interventions have contributed to escalate tensions and suspicions.

At a meeting this evening, the 22nd of November 2022, involving the Majority Caucus, the Leadership of the Party and the Council of Elders, it has been agreed by all to refocus and recline to the earlier position requested by the President,
to wit:

1. The demand be stood down until the conclusion of the round of negotiations with the International Monetary Fund (IMF) which would feed into the 2023 Budget;

2. The presentation of the 2023 Budget Statement and Economic Policy on the 24th November 2022 by the Finance Minister on behalf of the President; and

3. The subsequent presentation and passage of the Appropriation Bill

The meeting agreed that the President would act upon the initial request of the NPP Parliamentary Caucus after the conclusion of these matters.

Leadership and the Party in this regard call upon the Members of Parliament to attend to all Government Businesses in the House /including, in particular, the 2023 Budget Statement and Economic Policy and all connected matters.