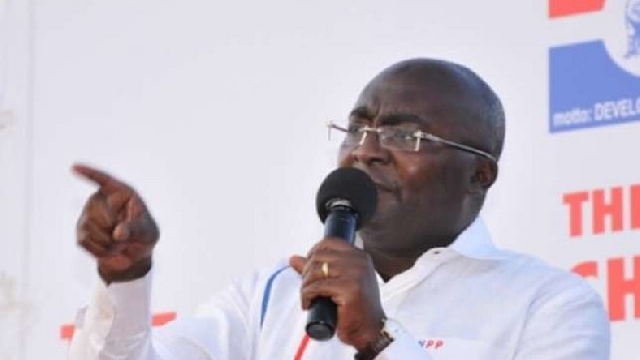 “We recall that after eight years in office, the results of their economic management were declining growth, high and constantly rising inflation, rapidly depreciating currency, loss of business confidence, high unemployment, poorly regulated finance sector, a collapsing NHIS, no ambulance system to speak about, dumsor, 45 per cent average annual increase in electricity prices, increases in taxes, freeze on public recruitment and cut on research allowances”, Dr Bawumia said at the governing New Patriotic Party’s Saturday, 27 June 202 event to acclaim his boss, President Nana Akufo-Addo as the party’s presidential candidate for 2020, adding: “Finally, they ended with the IMF for a bailout.”

He also accused the NDC of not reading, thus, its General Secretary, Mr Johnson Asiedu Nketia’s recent faux pas of wrongly interpreting a recent Supreme Court judge in a case filed by the party and a private citizen against the Electoral Commission in their attempt to stop the election management body from going ahead with its plan to compile a new register of voters.

According to him, Mr Asiedu Nketia misled the public with his goof because the NDC does not like reading.

At the same event, President Akufo-Addo, in his acceptance speech after the acclamation, described the NDC as a party that only destroys.

The NPP, on the other hand, he noted, is a party that fixes things.

“In spite of the truly abysmal state in which we found the economy of Ghana in January 2017, we can be proud of what we have been able to achieve in the past three and a half years. We are not there yet; we are not where we want Ghana to be, and we are very much aware of the amount of work that remains to be done. We have demonstrated, though, beyond any shadow of a doubt, our competence in the management of the national economy, since, without competence, we cannot improve on the welfare of the masses”, Mr Akufo-Addo said.

“We have a good story to tell, and we should go out to tell it. On every sector of our lives, we should show the difference between the NPP way of tackling problems, and the way our opponents do it”, he noted.

“We grow the economy; they shrink the economy. We create the properly regulated, enabling atmosphere for businesses to flourish, they allow chancers and speculators to lure citizens into putting their monies in dodgy enterprises. They bring our banks and financial services to near collapse, and we have to clean up, shore up and restore confidence”, he said, adding: “They plunge us into DUMSOR, we keep the lights on. They look on clueless, as hundreds of thousands of Ghana’s children exit school at JHS, we bring Free SHS and Free TVET to prepare our children better to face life. They resort to crude language when faced with difficult arguments, we raise the level of public discourse”.

He continued: “We owe it to ourselves and to Ghana to win the elections in December decisively, to make sure that we keep the economy on track, and not in the hands of people who will run it into the ground again”.

He said the NDC flag bearer’s “demagogic pronouncements about your so-called ‘love’ of the masses do not put food on the table; do not send the child to school; do not guarantee access to good healthcare; do not assure the pensioner the value of his pension. We do not believe in pitting the rich against the poor, or the poor against the rich. We believe in helping every Ghanaian to climb up the ladder of progress, and we have been consistent in this, not just in words, but in deeds”.

“We are told that those who were responsible for the worst economic performance of the last thirty (30) years have learnt their lessons, and seek another opportunity to correct their mistakes. Dare I ask – should the presidency be for experiments? Surely not! You, the Ghanaian people, deserve better, and you will get better on 7th December, with four (4) more years for Nana and the NPP to do more for you”.

I urge you, therefore, my dear friends and colleagues, to go out with the confidence that comes from your government performing well, and running the affairs of the country competently. Tell our story to the Ghanaian people, and tell it often.