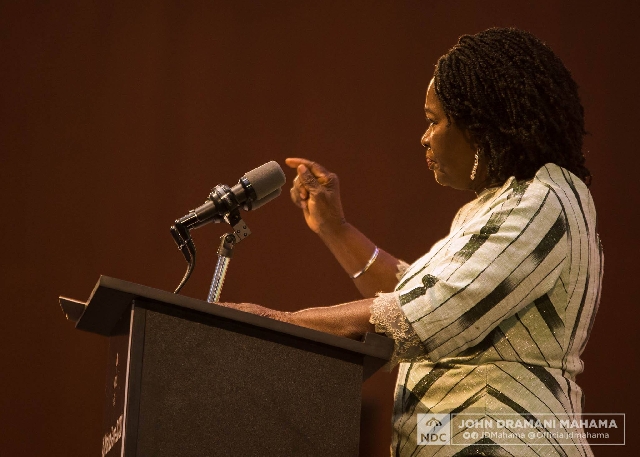 A political marketing strategist at the University of Ghana Business School (UGBS), Dr Kobby Mensah, has indicated that the running mate to the flag bearer of the National Democratic Congress, Professor Naana Jane Opoku-Agyemang, will give Vice-President Mahamudu Bawumia strong competition during political campaigns in the run-up to the December 2020 polls.

Judging from the “scope of the campaign message; the utterances, phrases and some key issues she highlighted” at her outdooring ceremony on Monday, 27 July 2020, Dr Mensah said the former Education Minister “will give Bawumia a run for his money on campaign platforms.”

The flag bearer of the NDC, former President John Dramani Mahama, inaugurated the former Education Minister in Accra where they both addressed the country in separate speeches.

Being her maiden public speech after she was chosen by Mr Mahama as his vice-presidential aspirant, scores of politicians, social commentators and members of the general public have been keenly discussing the former Vice-Chancellor’s speech and composure.

Dr Kobby Mensah indicated that the educationist rehashed the NDC’s consistent call for “diversity and inclusion”, adding that her composure complemented her speech.

Speaking to Class News, Dr Mensah said the “majority of us had the opportunity to listen to her extensively, perhaps, you will understand the diversity question that the NDC has been putting across, saying that they have actually been at the forefront of diversity and inclusion.”

“You’d realise that from the beginning, she was a little bit mild and then she went into a very tough-looking, tough-sounding position. So, if you thought that her demeanour shows a calm person, in her oratory delivery you see the other side of her”.

“So, I think that it was OK to demonstrate that aspect because people thought that, perhaps, she could be ‘a walk in the park’ when it comes to comparison with Bawumia. But I think Bawumia will have a run for his money, looking at the way that she actually transitioned from a very calm position to a high tempo,” he concluded.

Professor Opoku-Ageyemang is currently on her maiden campaign tour in the Cental Region.