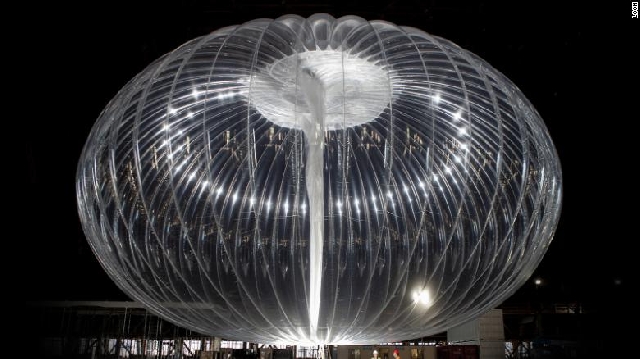 It's the first balloon-powered internet to launch in Africa, and the first non-emergency commercial deployment in the world, the two companies said.

According to a statement, the project will use a fleet of 35 or more balloons floating 20 kilometers above ground, in constant motion in the stratosphere, to provide 4G LTE service spanning 50,000 square kilometers across central and western Kenya.

The balloons are launched from locations in the United States and are being navigated to Kenya using wind currents. According to Project Loon, more balloons will be released as more experience in flying over Kenya is gained.

The technology will "offer connectivity to the many Kenyans who live in remote regions that are underserved or totally unserved, and as such remain disadvantaged," Telkom Kenya's CEO, Mugo Kibati said in the statement released Tuesday.

Project Loon balloons had previously been used to provide emergency connectivity in the aftermath of crises such as Hurricane Maria in Puerto Rico when mobile networks went down.

The project, which had been in the works for years, was accelerated by the coronavirus pandemic and the global necessity to work online. The Loon project has the ability to connect "targeted communities to emergency services, as well as ensure enhanced and alternative communication options during this time," said Loon Inc. CEO Alistair Westgarth in the statement.

The balloons are made from polyethylene sheets and are about the size of tennis courts.

In a televised address in March, Kenyan President Uhuru Kenyatta said the balloons will allow the country retain its competitive advantage in information and communications technology and innovation on the continent.

Only 28% of Africa's 1.3 billion people have access to the internet, according to a 2019 report by the Alliance for Affordable Internet. Loon and Telkom Kenya are hoping to close this gap.