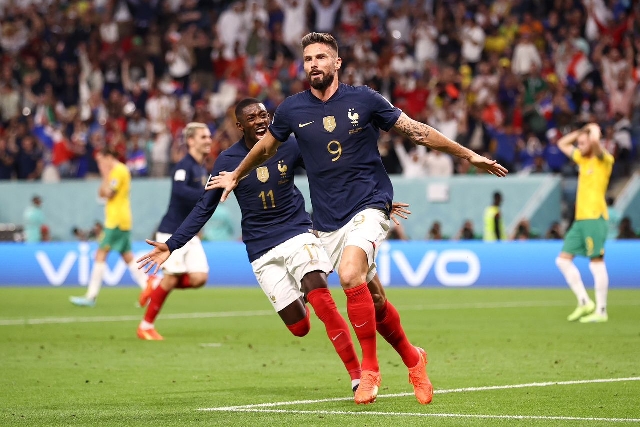 France have lost a host of players in the build-up to the tournament, including key striker Karim Benzema, but made light of those setbacks with a thrilling attacking display after going behind.

Craig Goodwin gave the Socceroos a shock early lead when he powered home a far-post finish after nine minutes but they then fell victim to France's firepower led by veteran Giroud and Kylian Mbappe.

Adrien Rabiot's header put France level after 27 minutes then he set up Giroud - standing in for Ballon d'Or winner Benzema who sustained a thigh injury in training - for a simple finish five minutes later following a brilliant Mbappe backheel.

Mbappe was a threat throughout and got his first goal of this World Cup when he headed in Ousmane Dembele's cross after 68 minutes before turning creator three minutes later.

He delivered the perfect cross for Giroud to score with a header, equalling Henry's record of 51 France goals in the process.

France suffered a shock early on when they went behind but then turned on the class to overpower Australia with a show of attacking quality that sent an ominous signal to those wishing to take away their crown.

Coach Didier Deschamps has not only lost striker Benzema but also defender Presnel Kimpembe, midfielders N'Golo Kante and Paul Pogba, plus striker Christopher Nkunku. France were also deprived of defender Lucas Hernandez after only nine minutes as he tried to defend Australia's goal.

These are serious blows but this also offered a chance for France to demonstrate their strength in depth and it was in the attack that they showed just how devastating they can be.

At the heart of it all was 36-year-old Giroud, showing his enduring quality with two goals and a fine all-round display. Of course, France will miss Benzema, but Giroud looked in the mood to take his unexpected opportunity.

The AC Milan forward also took his place in the history books by equalling Henry's record and now has the opportunity to eclipse it on the biggest stage of all.

Mbappe gave Australia's defence nightmares with his pace, creation and threat. He fully deserved his goal and could have had more, particularly when he volleyed over an open goal in the first half.

France already look like the outstanding side in Group D, which also includes Denmark and Tunisia. They will be tested more sternly but this was an ideal opening for the defending champions.

Australia battle to no avail

Australia got the perfect start with Goodwin's goal and had their moments later, especially when Jackson Irvine's header hit the post, but they simply could not cope with what France had to offer.

The Socceroos, as they always do, competed all the way and never stopped running and fighting, but better teams than this one will struggle to cope with the French forward line when they play like this.

Australia are still in with a chance of progress after the dull goalless draw between Denmark and Tunisia and history tells us they cannot be discounted, despite starting their World Cup campaign with a defeat.