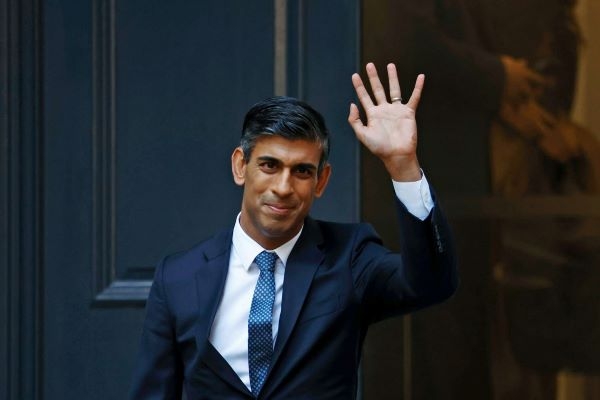 In his first speech as British prime minister, Rishi Sunak warned his country that tough economic times — and tough decisions — were ahead, that “mistakes were made” by his predecessors, that he would work hard to earn the people’s trust.

He promised to govern with “integrity, professionalism and accountability at every level,” qualities he suggested were lacking when he resigned from former prime minister Boris Johnson’s government and led a revolt against his former boss.

“Trust is earned and I will earn yours,” he said, but did not offer a list of policies or solutions.

His brief speech, minutes after he was asked to form a new government by King Charles III, was tightly focused; there was no celebration, no victory lap.

The 42-year-old Sunak, the youngest prime minister here in 200 years, stressed the word “hard” in his remarks. “I fully appreciate how hard things are,” he said.

At the door of 10 Downing Street, he waved to photographers for the traditional photo op. He did not smile. A photographer shouted, “Be happy!” But he did not beam or give a thumbs up, as Johnson would have. He struck a pose of being all business.

Sunak promised Britons “to put your needs above politics,” adding, “together we can achieve incredible things.”

He will spend the day building his Cabinet — and the appointments will provide more insight into what direction he wants to take Britain.

The day also marked the end of Liz Truss’s tenure as Britain’s shortest-serving prime minister, after just 49 days in office. Her attempt to cut taxes for high-earners and corporations without a plan to pay for it caused markets to reel. She backpedaled, but she could not save her premiership.

Truss hosted a final cabinet meeting Tuesday morning and then made brief, defiant farewell remarks outside, saying she still believed in a high-wage, high-growth economy. “From my time as prime minister, I am more convinced than ever that we need to be bold and confront the challenges we face. As the Roman philosopher Seneca wrote, ‘it is not that things are difficult that we do not dare, it’s because we do not dare, that it is difficult.’” She stumbled somewhat over Seneca’s name.

“It means lower taxes so people can keep more of the money they earn. And it means delivering growth that will lead to more job security, higher wages and more opportunities for our children and grandchildren,” Truss said.

Truss, who will now join former prime ministers Theresa May and Johnson as a lawmaker on the back benches in Parliament, said Britain would continue to support Ukraine. She wished “every success” to her replacement. She closed with: “We continue to battle through a storm but I believe in Britain, I believe in the British people and I know that brighter days lie ahead.”